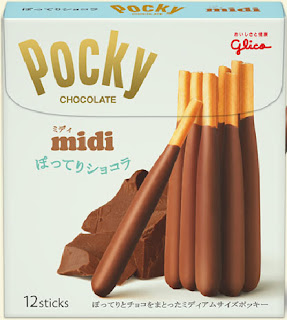 All images from Glico's web site.

On March 19, Glico released a new version of Pocky called "Midi". It is a shorter, stubbier version of the bread stick with sweet candy-ish coating that people inexplicably go crazy for. They seem to resemble a club or bat with their growth-inhibited appearance. The reason they're so fat is that there is whipped chocolate in the center which is then coated with a more normal Pocky chocolate coating. The "midi" probably stands for "middle". 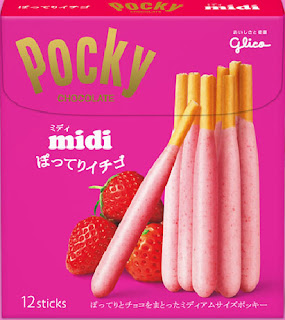 There are two flavors of Midi, both rather boring. That is to say strawberry and chocolate. Glico, like Nestle Japan, seems to be doing fewer esoteric flavors for its signature products. One of the weirdest options that is not a strange flavor is "Pocky Bran". I guess it's the Japanese equivalent of a Fiber One brownie.

Other than the bran Pocky, the flavor offerings are pretty normal. The full listing is: regular chocolate, thin Pocky (50 sticks per box), matcha (green tea) cream, "pebbly" (tsubu tsubu) strawberry, almond crush (chocolate with almond pieces for texture), cookie crush/crunch (chocolate with cookie pieces for texture), (milk) cocoa, strawberry (smooth), and Panda Pocky (cookies & cream). All of these are pretty pedestrian flavors that have been around for quite awhile. Note that there are other flavors out there, but they are not being promoted in the Japanese market. Some of the more exotic flavors are in other Asian countries and may or may not show up in Japan. I can say that the flavors I've listed are the only ones on the web site, but I've seen coconut Pocky, "milk", and other flavors in Asian markets around me. 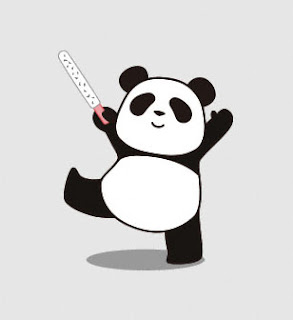 It may look like he's holding up a pregnancy tester, but that's supposed to be a Pocky stick.

Currently, Glico is marketing Pocky with the slogan "Let's Share! Pocky!" I'm guessing there were tons of people who were hoarding it and refusing to let anyone have any, or something. On a brighter side, there are a whole host of nifty downloads. There's some panda papercraft that you can download and fold. An application for iPad, iPod, etc. A New Year's card, which I'm mentioning rather late, but there are no years attached to most of the designs so you can  be really early for next year or rather late for this one. And, of course a whole bunch of wallpapers.
Posted by Orchid64 at 8:00 AM

I just stumbled upon your blog while searching for info on Japanese Kit Kats. I enjoyed reading your posts and lol-ed. I have bookmarked your page!

Thanks, ZedEmPee! I'm glad you're enjoying my posts!

I brought both of the flavors last week! I love both flavors. They are much more creamier than the normal pocky. You can't feel much of the bread stick because the chocolate part is fairly thick. The bread stick part also felt different, somehow, but maybe that's just me.. :)

If they're creamier, that can only be a good thing! I still don't know if I'd buy them though since I'm not a huge Pocky fan to begin with and the flavors are pretty boring. However, your comment does increase my interest level!

I'm not a huge pocky fan but I really like these. Basically you get a double thick layer of chocolate, strawberry or my favorite green tea then you do with the traditional ones.

I happened to google for midi series of pocky and specially want to get the greentea midi Pocky which my Japanese colleague bought for me (it's awesoooome). It surprises me that the greentea flavor was not even listed in here! D=

At the time of this post, it wasn't being promoted by Glico. In fact, green tea still is not listed on Glico's web site as an option. My guess is that it is a limited edition flavor (spring is a bit time for green tea flavors)!