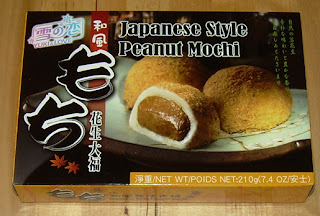 Have you ever wondered which part of an Oreo cookie makes the cookie better? Is it the slightly bitter, not terribly sweet and crispy outer cookie or the creamy, sweet death-mush in the center. If eating habits are any indication, that is, our tendency to mush together two cookies divorced of one half of their outer cookie sandwich, then the filling is the star of the show. That being said, in Japan, they used to sell only the outer cookie sans the sugary goo. Tastes are relative, after all.

When thinking about mochi treats, one can ask the same question, though I'm figuring those that are not aficionados of Japanese traditional sweets would say, "neither". Those who are connoisseurs would likely say, "both." As someone who just buys snacks for a living, I'm definitely saying the proof is in the rice cake (mochi) and that a substandard mochi experience will make or break the experience. 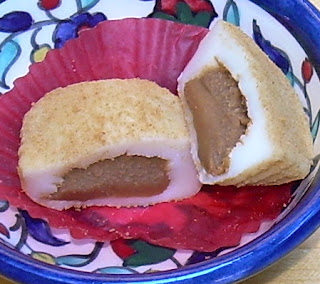 The peanut filling of this is lightly sweet, dense, and pretty fatty. The texture is rich, but it's a little kludgy, like "natural" peanut butter before it has been stirred (though not quite that bad). The mochi is where things fall apart. It's actually nicely balanced in terms of taste and lends a sweetness from the rice cake having been infused with a bit of sugar and a nuttiness due to the powder on the exterior. The place where it all goes wrong is the mochi's texture.

The first time I tried a "Yuki & Love" Japanese style mochi, I loved it. It was soft and tasty with a delicate taro (like a potato, only, not) filling. I was so excited that I was dying to try another flavor and scooped up boxes of other varieties when I found them on sale. The second time was a more so-so experience, but that was largely due to the weirdness of the brown sugar flavor in that one. This time, the mochi was just crummy. It was too thick and rubbery, like chewy on the eraser on the end of a number 2 pencil. I don't know if this was old or if they just did a bad job on this particular one, but it really ruined the experience. Despite being quite good with the flavor (and being an enormous fan of all things peanut butter), I didn't finish the box. I kept going back and trying them, even microwaving them to soften the thick exterior, but it didn't help. I ended up throwing out half of the box because they just weren't worth the 130 calories per rubbery lump.

I hope this was a "bad batch", but I'm unlikely to try this variety again. I'm not giving up on the brand and will try another, but if it doesn't get better after the next sampling, I'll be saying goodbye to "Yuki & Love", or at least their Japanese style mochi offerings.

Wow! I did a review on this one too, and had similar issues. Again, I don't necessarily think it's a BAD treat, but just not good? I hope it makes sense because it was terrible... That said, it was one of my first reviews and bleh! Glad I'm not crazy, maybe you and I think it isn't a 'bad batch' issue.

By the way here was my review...
http://whatsstockyeating.blogspot.com/2011/04/japanese-style-peanut-mochi-review.html

Try this variety instead: