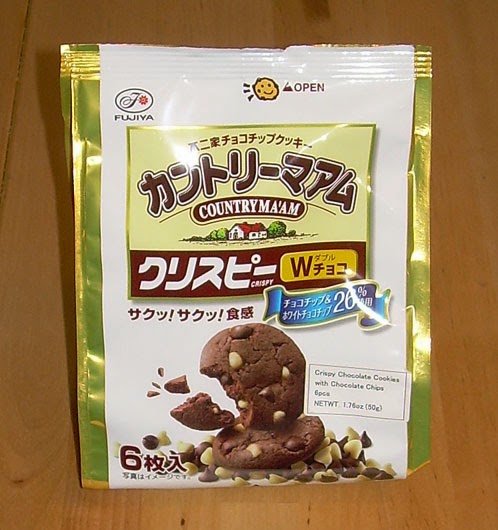 There was often a confusion in Japan about the difference between "ma'am" and "mom". In terms of how they get translated from English to Japanese, the sounds are very likely indistinguishable. That's my way of saying that I don't know if this brand name is meant to bring to mind an old-fashioned mother in an apron making fresh baked cookies for her brood or if it's meant to elicit a gentile woman who lives in the country and serves her guests, for who she is the quintessential hostess, an array of fine sweets at tea time. Of course, it doesn't matter, but part of what I think about is branding and who it is meant to appeal to. The names of successful products are important and savvy companies know it.

The Country Ma'am line has expanded since its early days of being the soft cookie that you put in the microwave for a fresh-baked experience. Part of that expansion is the "crispy" line. Part of it at present is also a summer offering of cookies that are supposed to be put in the freezer. Whatever your temperature wishes, Country Ma'am appears to have you covered - hot, cold, or room temperature. The crispy line is for those who don't want to fuss with major appliances. I tried one in the microwave and it didn't do anything for it and I'm pretty sure that freezing wouldn't do much for it either.

I picked this up for $1.50 at Daiso Japan. Each bag contains 6 cookies at 46 calories per tiny cookie. One of the things that tends to put me off of the Country Ma'am line is that they are so fatty and rich for such a small morsel. In terms of the calories, they are the Oreo of the Japanese cookie world. I tend to prefer to spend my calories on a meringue cookie or a rice cracker (sembei) instead of two small bites of cookie. This consideration may not matter to most people, but it matters to me. 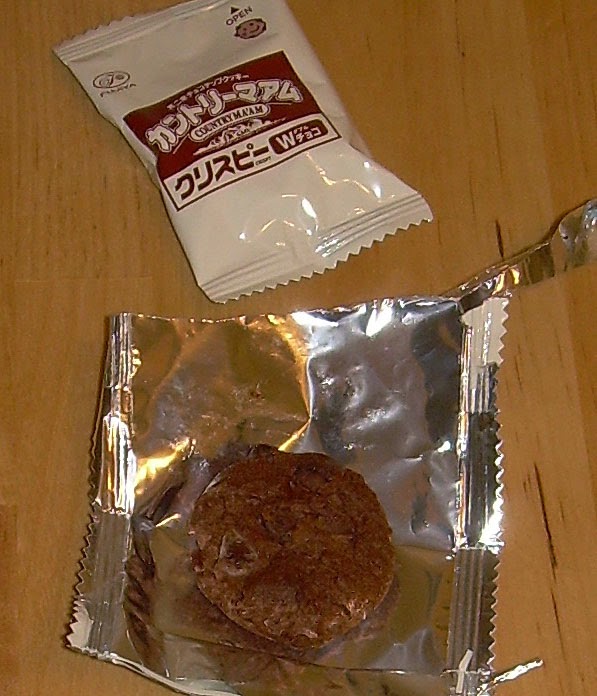 The point of the crispy cookies is rather obviously to offer a cookie which is crunchy. These do deliver on that front. They are tiny little crispy cookies (a little bigger than a quarter or 100-yen coin) with a deeply rich chocolate flavor. In fact, the flavor is reminiscent of a brownie. They are very similar to something that I recently tried here in the U.S. called "brownie brittle." The main difference is that the brittle is super crispy and these are between a regular cookie and that brittle in texture.

The call on this is hard to make. These are good little cookies with a nice texture, but given the small size, I'd rather blow 50 calories on a slab of brownie brittle (which will give me far more time with the texture and flavor for the same calorie footprint). However, not everyone can get brownie brittle and the comparison isn't quite fair. If I was in Japan and I wanted to have a shelf-stable bite with a nice chocolate punch, I'd buy these. Here in the U.S., with other options, I can't see choosing this again. So, I'm rating this as "indifferent", but that's only because I have other choices which are cheaper, more flavorful, and a better calorie to enjoyment ratio. If I were still in Japan, these would probably get a "happy" rating.