Let's get the big laugh out of the way first. When you say "Calpis", it sounds like "cow piss". The makers of Calpis either didn't know or didn't care about that when they made the name. The "cal" is for Calcium and the (rather unfortunate) "pis" is from Sanskrit and supposedly means "supreme taste" and is used because it is part of Buddist culture (and Japanese culture has elements of Buddism). Note that in English-speaking countries, this is called "Calpico". 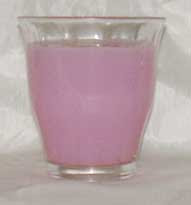 Despite having been here for 20 years, I've never been tempted to buy Calpis. I chuckled about it a few times when I first got here, and promptly lost interest. The drink is supposed to be yogurt-like and feature milky flavors. It's called a "lactic acid" beverage. The color of this beverage certainly would bear that out as it is very cloudy and appears to be mixed with something milky.

This attracted me to it because it is zero calorie, though the first ingredient is, oddly "grape sugar". I'm guessing that it is not absolutely zero, but one of those deals where it is essentially zero per 100 ml. The other ingredients include the usual cocktail of artificial sweeteners.

This smells like grape soda, and on first sip, tastes like it. It has two strange aftertastes. The first is likely the lactic acid/milk element and the second is the artificial sweetener. I don't know what it is about Japanese low calorie sodas, but with the exception of Diet Coke, they all seem to have a heavy chemical flavor. This one is better than some on that front, but the weird bitterness and somewhat metallic taste that chases every sip spoils what might have been a promising beverage. So, while I drank the rest of the bottle, I wouldn't buy it again.

Oooh! I just saw this in the store 2 days ago. I didn't buy it because I'm not a grape fan, nor a calpis fan either (ex-farm girl, just can't bring myself to drink something with that name!)

Glad I skipped it afterall.

I wouldn't drink just because it has artificial sweeteners! Bad stuff!

I've noticed that grape sugar is in ALOT of japanese snacks lately, drinks included. It's worrying.

I'm not a big fan of "zero" drinks because they mostly have that aspartame stuff in which is dangerous for your health.

I remember when I first came to Japan 9 years ago, they barely had diet coke... now everything is o.... FINALLY!

Do they use stevia or the chemical infused sweeteners?

I know artificial sweeteners are bad for you, but so is sugar. Drinking sugar really bothers me (and I only eat it in small portions) because of the way it washes over your teeth. Also, frankly, I just feel like the calories are less worthwhile when drunk as opposed to being eaten.

April Marie: I am also surprised that there is a much higher amount of reduced or low calorie stuff now as compared to when we first got here. When we first arrived, you couldn't even get a Diet Coke! You could only get "Coke Light" which had reduced but not zero calories.

I use SweetLeaf Sweetener(stevia). It's the only stevia brand or sweetener on the market with 0 calories, 0 carbs, and a 0 glcemic index!

I LOVE this stuff, I don't care what it's made out of :D. Last time I was in Japan there weren't a whole lot of zero cal things to drink. Especially when trying to be caffeine free. I'm hoping this is caffeine free and vegetarian. Please don't tell me if this isn't the case. Well, the vegetarian part I would want to know.

Hi, Cathy, and thanks for reading and commenting. I'm pretty sure this is vegetarian safe, though it's almost certainly not vegan-friendly since milk is a part of it.

I should try regular Calpis some day. It's hard to actually get around to everything though. ;-)

I luuurve Calpis! Everytime I go to Japan I gotta have it..but I was ecstatic when, on my last few trips I found Calpis Zero! (finally I can drink gallons of this stuff without foregoing my meals!!)

So i've tried 2 flavours so far - lemon and ume. I liked the ume one, cos the lemon one just tasted like lemon yoghurt gone wrong. But now I would really like to try this grape one....

Hi, Sandy, and thanks for commenting and reading!

I haven't seen either the ume or lemon versions, but I think they would be interesting to try if they show up in my area!