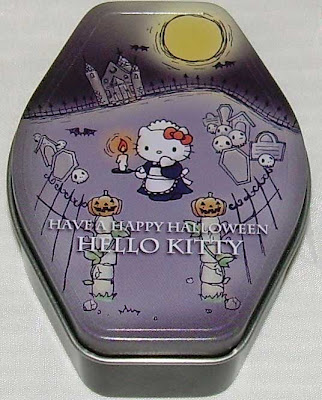 There are two "Family Mart" convenience stores within walking distance of my home. One is about 5 minutes away and the other about 9. I usually go to the closer one, but was in the mood for a walk and visited the other and discovered that all conbini of the same chain are not treated alike. One of them had a display of special "Hello Kitty" Halloween tins with Tirol chocolates and the other did not. I'm guessing this has to do with the fact that the one that is furthest away is a lot closer to a subway station on a major line. 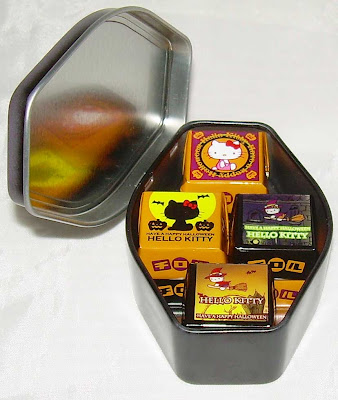 The tins are 315 yen each ($3.46) and you get to choose 8 Halloween-themed small Tirol candies to put in it (not the premium ones which are larger and cost 32 yen (35 cents) each. The value of 8 of these small candies is 80 yen (88 cents), so you're really just paying for access to a small, extremely cute tin featuring Hello Kitty. The display box, incidentally, gives you instructions for exactly how to place the candies in the tins. 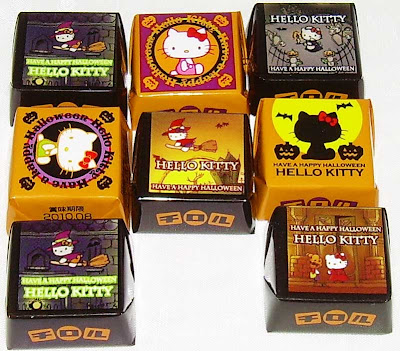 There are two styles of tins. One is a square-shaped house which doesn't seem nearly as Halloween-like (but has Halloween designs) and the other is the coffin. There were 3 designs for each style of tin and they were repeated on the packages of the chocolates (most of which are pictured above). There are only two kinds of Tirol candies to choose from and I have reviewed both of them before. One is "Bis", a bland little cracker-like biscuit covered in chocolate, and the other is a chocolate-covered roasted almond. Both of these are included in my previous review of a variety pack. Of course, one doesn't buy these for the candy. In my case, I didn't even buy this for the tin for myself. I bought the tin to send to someone back home as a gift. While I'm not immune to the extreme cutenesss of some Hello Kitty stuff, I'm not really enamored of her. 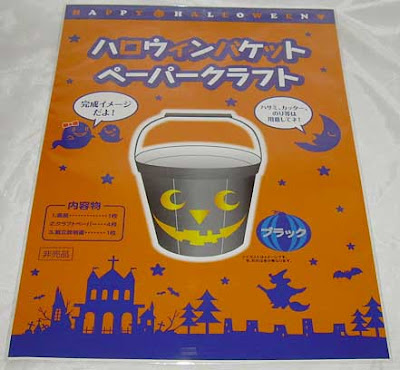 Family Mart is doing a full-scale Halloween campaign (detailed on their site in Japanese) and you are given a free papercraft Halloween bucket when you buy one of the items that is a part of the campaign.

Image pilfered from Family Mart's site.
There are three colors and styles of buckets. The one I got is black. I'm not going to open it and put it together, but I did pinch a picture off of Family Mart's site which shows what they're supposed to look like.
Posted by Orchid64 at 12:00 AM

Although abit wasteful, papercraft at least, is easier to get rid of after halloween. Those plastic containers you can get for candy that look like this just take up space and gather dust.

Man.. they whore out Hello Kitty each seasonal festivity, eh? Tigger and Pooh San is my fav...

Kelly: True, but you can't take a papercraft bucket out for trick-or-treating. The plastic ones serve a purpose once a year for either kids to carry or people to store their candy for dispensing to kids on all Hallow's Eve. I think that we're talking apples and oranges - the plastic ones are functional (and reusable), the paper ones are decorative. You can't really compare them.

April Marie: They have to pay Disney for Tigger and Pooh, so I'm guessing Hello Kitty is cheaper. ;-)

Oh, Well i was thinking in the context of it being in Japan, that's all, I wasn't sure alot of kids go trick or treating over there. :) So I thought maybe they brought it out for that reason.

I don't know much about halloween, since we don't do it here. :)

It seems like anyone can have access to Hello Kitty. Although, there have been many Tirol promotional items for different characters in the past, so they must be big sellers. The chocolates certainly look cuter with Kitty's face on them!

Well, here's the thing. They don't sell the plastic buckets in Japan except as imports in a few limited areas.

This year, there was a special trick-or-treat deal in my area where kids essentially went to visit merchants for treats for the Japanese kids. The foreign kids in the gaijin ghettos also go trick-or-treating.