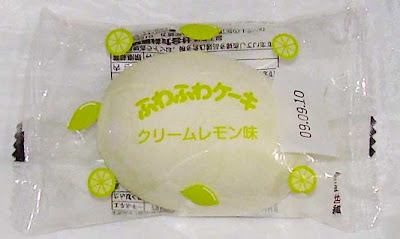 One thing Japan is renowned for is the freshness of its food and the fussiness of its populace when it comes to buying the freshest food. The Japanese, on the whole, are willing to pay more for higher quality food. The main problem with paying more for something which is fresh is that you lose value if you sit on that food for a long time. Such was the case with this marshmallow which I'm sure was as good quality as the first one of these that I reviewed when I bought it, but had gone a bit stale after about a month in the refrigerator.

Given how favorably inclined toward the anko Fuwa Fuwa marshmallow cake, I was looking forward to sampling another variety, despite my delay in getting to it. My husband found these at New Days convenience store for about 50 yen (50 cents). To be fair, I should preface this review by saying that I'm not a huge lemon fan, though I like it well enough. I tend to favor lemon in cakes and cookies though rather than candy. In candy, lemon often reminds me of cough drops unless the the flavor is greatly diluted.

The fact that this marshmallow is filled with a type of lemon sauce was slightly surprising. The package does say "cream", not sauce. The marshmallow itself is lightly lemon-flavored, but the filling in the center is really intense. The sweetness level is quite appropriate, but the lemon is strong.

We had two of these and my husband was keener on it than I, though I have to say that he had a cold and the flavor may have been muted for him. I thought this was good for what it was, but the lemon was too much for me. It really did remind me of medicine and I think I even imagined a honey flavor attached to it (like a lemon honey cough drop). If you enjoy really strong lemon sweets and hard candies in particular, this might really float your boat. Otherwise, it'll probably be too much for you, too.

The lemon even in colour looks quite intense in the middle there. :/

It does indeed. You can tell they didn't skimp on the lemon flavor!