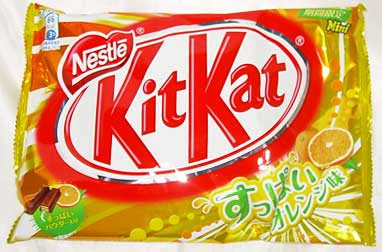 Lately, I've been rather lucky about finding mini KitKats for individual sale at convenience stores. That means I don't have to gamble on a huge bag of them while not knowing whether I like them or not. For some reason, these "suppai orange" KitKats never made it to the individual bins. If I had to guess, I'd think it has something to do with the fact that a lot of those individual bars don't seem to be selling very well. I still see ramune KitKat minis for sale in AM/PM and they were a summer release. While it's not unusual for older seasonal releases to show up at the discount snack store long after the season passes, it's unusual to see them in a convenience store. 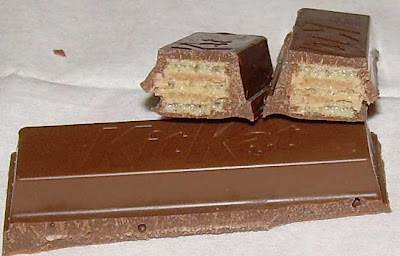 I did buy these in the discount snack shop, but mainly because they were on sale for 198 yen ($2.20). For the record, these types of bags usually sell for about 258 yen ($2.88). I didn't pay close attention, but I believe that there were 14 12.3 gram (.43 oz.) bars in the bag. "Suppai orange", incidentally is "sour orange", so this is another in a long line of chocolate orange combinations that I've sampled in Japan.

When you first open the package, it smells like a nice orange chocolate flavor. The bars are a bit soft, even at reasonable room temperatures and have the KitKat wafer texture that one would expect. The flavor is a very nice combination of chocolate and intense orange flavor. It's not so much "sour orange" as just strong orange, juicy orange flavor. Frankly, the flavor of this really reminded me of a chocolate and orange Tootsie Roll mixed together, though the texture was pure KitKat.

I really liked these and I think anyone who is a fan of orange and chocolate together may enjoy these. The only concern would be that the orange might be too intense for some. This would be a bigger issue if the orange tasted fake, but I think it has good verisimilitude with real orange flavor.

OH my gosh, you found another. You are on a roll!!!!! Sour Orange... which reminds me I had some with non-fat yogurt yesterday.

Yuuuum, another Jaffa Cake substitute! The chocolate/orange combo always reminds me of Christmas (I always got a Terry's Chocolate Orange in my stocking).

April Marie: And I had some today, non-fat yogurt, that is. Well, I had it after a fashion. I made a quasi-banana-frozen yogurt deal out of it. Frozen banana slices, about 1/2 cup of yogurt, 3 packets of Splenda, cinnamon, vanilla, and about 1/3 cup of crushed ice tossed in the blender and frapped until smooth. Yummy!

anchan: I didn't even think of this as another candidate as a Jaffa cake substitute! These are great though. I love Terry's Chocolate Oranges! I haven't seen one for years though!

Thanks for the comments and for reading!

We tried these, and thought the orange was too intense and kinda fake. However it's not like we didn't eat the whole bag. Great review. :)

Hi, Pocky Watch, and thank you for your comment and for reading! I'll also add you to my list of review blogs in the links. Your blog looks great!

I can see how this would be too strong for some people. It is like concentrated orange juice to these taste buds. I like intense flavors for some things, but am sensitive to strong flavors for other things. Orange is a bit hard to overdue for me.

Do you know of a website which offers various Japanese Kit Kat bars but is translated in English? I'm dying to try these marvelous flavors but so few are available here in the states.

Hi, Lady J, and thanks for your comments. A lot of people buy things from J-List, but I can't really speak to their selection since I don't buy things on-line. They do appear to offer at least some of the exotic KitKats at present.