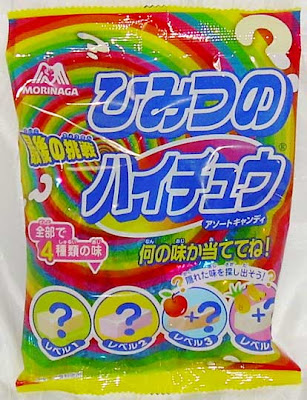 Have you ever seen a movie trailer which spoils some of the best mysteries of the movie by revealing some critical plot point or telling you something which would be better not to know? Well, Morinaga obviously subscribes to the same type of thinking. They go to the trouble of making a "mystery pack" and then detail all of the flavors on the back of the bag.

I guess the mystery isn't what the flavors are in general, but which flavor you might get in each packet. The thing is that they also assign "levels" to the candy and give you a clue of what might be in each one which further undermines the mystery. I'm guessing that the lowest level candies are supposed to be easier to identify than the higher level ones.

While I usually take pictures of the open candy, it hardly seemed worth it for these because it's just a bunch of differently colored taffy blobs. The flavors are:

lemon ("Level 1"): very nicely tart with a good lemon scent and flavor; a complete winner on the flavor front, even for someone like me who isn't mad about lemon candies (but certainly not averse to them either). I could guess what this was from the scent alone. The color was light yellow.

lime ("Level 1"): Sharp, tart flavor. I couldn't smell anything when I sniffed it, but my husband said he could and knew it was lime before tasting it.

grape ("Level 2"): this was your normal Kool-aid grape candy flavor. It was classic kid's flavor with perhaps just a tad more verisimilitude to the taste. While I certainly didn't dislike this, the flavor felt a bit cheap. Like the lemon, I easily guessed the flavor by the smell. It was light purple in color.

cantaloupe ("Level 3"): This was very sweet and had only the vaguest hint of melon flavor. It had a very mild perfume-like hint. It wasn't bad, but certainly not a favorite.

pineapple ("Level 4"): This was a pretty interesting candy because it had some of the less sweet notes of real pineapple in it. There's sometimes just a whisper of bitterness in it. This one was a bit of a dead giveaway since pineapple is pictures on the front of the package and it smells a bit like it.

lemon ("level 4"): Smells like lemon and there's a picture of one on the front. That means that they tip you off pretty well. Good lemon flavor which was nicely tart.

In terms of texture, these seemed stickier and harder to chew than the Hi-Chew candies I've reviewed before. They seemed to have more of a taffy or chewy candy element than the disintegrating gum aspects that I've noticed before. Also, they were all one solid color. Most (but not all) of the Hi-Chew I've experienced before were two-toned.

From a Hi-Chew consumers viewpoint, these were tasty. If you want to sample a lot of Hi-Chew flavors in one bag, these would be a good option, but the mystery part is simply silly when they're giving away so much of the game. There are 22 candies in one bag at about 17 calories per candy. Frankly, I'd opt for the rolls with flavors I know I'm going to enjoy rather than buy these again even though they were fine.

There are 2 Different lemons?

I think they're the same lemon under different mystery numbers!

I wonder if the numbers mean nothing and it's all randomized.

I've never tried these before.. are they similar to taffy? = )

They're sort of a cross between taffy and gum. They have more of a "latex" consistency than taffy, at least IMO. :-)