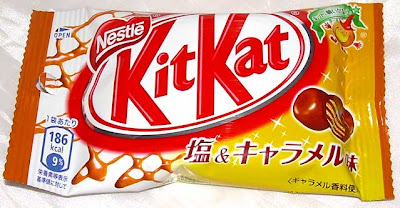 Back in college, I majored in psychology. In order to qualify for a degree, we all had to take a course in research and part of that was training rats. Contrary to popular belief, it's uncommon to train them in mazes. The usual way to train them is to put them in something called a "Skinner Box".

The box is like a little cage but it has a bar in it which releases a food pellet when the rat happens to press it. At first, the rat may accidentally hit the bar as it scurries around the confined space trying to get out. When it gets a pellet, it may then scurry around some more looking for others and accidentally hit the bar again. Eventually, it'll figure out that pressing the bar gets a food pellet. 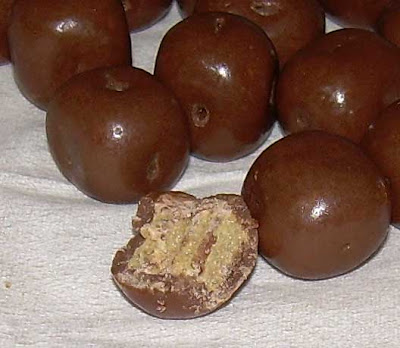 As I was considering these bite-size KitKats, I was thinking that these are like food pellets for humans. They don't really offer much over a regular KitKat bar, which is hardly unwieldy and difficult to manage. These do take away the "cumbersome" task of biting portions off of the bar, but I think the main point of offering this type of KitKat is to market them differently. Either that or they're priming us for psychological experiments with a gigantic Skinner box and this is a plan to introduce the form our food will take so that we'll be accustomed to it when the time comes.

My husband picked up these salty caramel bite-size KitKats at New Days for about 100 yen (about a dollar). There are 13 little pieces in the bag weighting in at 35 grams (1.2 oz.). You do get more chocolate per bite in this format, but I'm more of a fan of the wafers in the KitKats so that wasn't a plus for me. Also, there are 186 calories in the entire bag and I think this form encourages you to eat more than a regular KitKat which comes with two packs of two fingers. You're likely to eat half of a bar and all of this bag.

The KitKat bites smell like fake caramel, but so did the caramel purin KitKat minis (which incidentally are back on the shelves at this time because of Halloween), and those were better than expected. When you first take a bite, you get the strongest taste of salt. After that first bite, it tends to fade a bit but is still there as a pleasant addition. The caramel is a little on the strong and artificial side, but not overwhelmingly so. The chocolate is plain old Japanese milk chocolate (slightly bittersweet) and I think having more of it works well here because it stops the caramel cream from being a stronger flavor component.

I didn't expect to like these, but I ended up finding them pretty pleasant. I will say though that they may be less appealing if you're very sensitive to artificial flavoring or not fond of salty sweets. If neither of those is the case for you, I'd recommend trying these.

Nothing puts a damper on food more like artificial over tones... .man.... what a bummer.

I wonder, off topic, if Japan, in general avoids hydrogenated shortening in their snacks and cakes?

I've never seen KitKats in this form before. They're like malt Whoppers. Although, I don't know if I'll enjoy them because I like the wafers in KitKats too.

What comes to mind when I see these are throwing them up into the path of the projector in the movie theatre as kids...not these exactly, but maltesers which are the same shape. No one cares about the calories because most of them become dots on the screen or chocolate missiles in the back of other patrons heads ;)

These look really good! I'll do an exchange with you...KitKats for Popchips!

LOL! My husband is heading off to the U.S. in two weeks and will be buying me some goodies from there. ;-)

However, at some point, we may indeed do an exchange. :-)