Before I make my final review of a health/diet food for this week of such products, I'd like to say that there are tons of things which I didn't review, but many of them are very similar to what I've already mentioned and each other. One of the most common types of these foods which I passed on was granola bars. There was a cavalcade of them in a variety of flavors, including chocolate, vanilla, maple, and various fruits, but they all are essentially the same thing; that is, they are small portions of a standard granola bar fortified with certain minerals and vitamins. I skipped them because I didn't expect they'd be vastly different from any other candy bar parading as health food that you'd buy anywhere in the world.

I chose this bar mainly because it had a goofy name and was made by a company better known for its beer than its health food. Perhaps this is a little karmic balance for the good folks at Asahi. They destroy your liver on the one hand and then try to fix you a bit with a "diet support" bar with the equivalent of a multi-vitamin in it. Note that this is part of Asahi's "Slim-up" line of products.

I picked this up for about a hundred yen ($1.12) at a drug store not too far from my home called Tomod's. Tomod's is a chain so you're not unlikely to see them sprinkled all over Tokyo. They have quite a big display of health food bars including wafer, protein, granola, and meal replacement bars like Calorie Mate. Many of them aren't low calorie despite being marketed overtly as diet foods. I go to Tomod's mainly for the cheap toilet paper, and it was walking past their health food snack display that inspired me, at least in part, to do this week of reviews.

The bar is about 60% the length of its total package size.
When I opened the package, this smelled like a brownie with a chemical mixed in with it. It smelled good for a brief moment, then not so great. I think what I detected as "chemical" may have been the orange flavoring. I noted that the packaging is incredibly misleading in regards to the size. The calorie information also is for one of the two bars, not for the whole package. I think this is meant to make people think they're going to get more for the calories than they do. The size is about the width of one finger of a KitKat bar, though this is a bit longer. 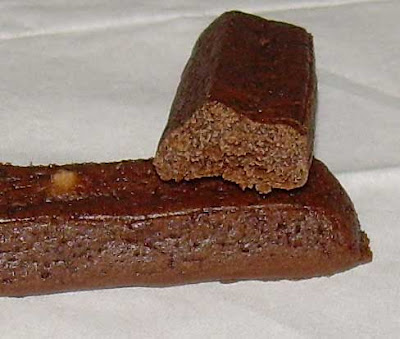 Unsurprisingly, this has a cocktail of sweeteners and chemicals. The first ingredient is flour and the second is Polydextrose (a sugar substitute). Shortening, Erythritol, and Maltitol also appear high in the list of ingredients and Sucralose makes a guest appearance near the end. The only surprise is "coconut milk powder", though I didn't taste or smell any coconut.

In terms of taste, it's okay. It's like a low quality chocolate brownie with orange mixed in, though I did experience a strange metallic aftertaste in my mouth after eating one bar. The main problem is the texture which is tough and chewy. It reminded me of the evil spawn of an unholy coupling between a Tootsie Roll and a brownie. It was just weird and brought home the fact that this was something no one would ever eat for pleasure, but only in some vain attempt to get nutrition from some food-like substance. Of course, if you're an Asahi beer customer and are drunk enough, you may not be able to tell the difference.

haha The tittle alone.... LOL, I've never tried these before, did try a ham and cracker sandwich whatchamacallit... but forgot the maker....

My favorites, out of what I've tried is Balance cup, calorie mate, and soy joy...

Well, it's 7 am and I'm off to have some of that Organic Raisin Bran from costco... a big bowl of it with low-fat milk.. OH.. have you tried the corn chips from there yet?

TOO salty.. I think I have a sensitivity to salt or something..

Somebody has to say it - that is one ugly bar!!
I hate products that mislead with the packaging... and that wrapper is far too big.

April Marie: I considered reviewing Soy Joy because they are everywhere, but my husband told me they're sold in the U.S. in pretty much the same form so I figured I'd try to focus on the things which I believed were more "Japanese" (though Yakult is everywhere). I should review the Balance Cup thing some time thoough!

I haven't tried the Costco corn chips because we hadn't seen them. Are they like Fritos? We're going there on March 23 to stock up on coffee and cheese so we'll look for them. Do you know the brand? The hubs loves corn chips, and salty things.

Cinabar: It does resemble a certain waste product, doesn't it? ;-)

Thanks to both of you for reading and taking the time to comment!

Oh yes... The Chips are salty, organic I LOVED them but the salt.. can't handle salt..

It is by Kirkland, Organic Tortillas Chips..

OH.. and didn't know that soy joy was sold in the US... AHHH