Having grown up in the United States, I've often felt bigger is better, particularly when it comes to food. After living in Japan for quite some time, I've come to realize that bigger isn't necessarily better. It really depends on what you're talking about, and those of you with dirty minds have no doubt rushed to some interesting conclusions. How do I know you're doing this? Well, I was there way ahead of you. 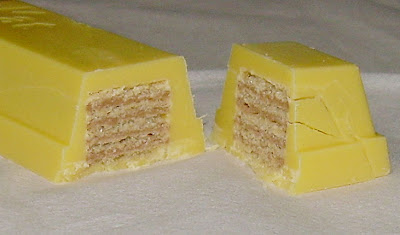 This is the second banana KitKat I've reviewed recently and the other was a limited edition Okinawa banana KitKat mini bar which I was not an especially great fan of. So, the question is, did making a banana KitKat bigger make it better? Oddly enough, as is the case with other banana-shaped things, bigger is better. (What? I was thinking of a boomerang... what were you thinking of?)

This bar smells like yellow circus peanuts and the taste is of very strong banana flavor. It's very sweet and actually tastes like banana circus peanuts minus the strong esthers flavor which makes that candy so gross. As fake banana bars go, this is pretty good, but so sweet. It has more of what I'd call a "candy" taste to it than a chocolate one. This bar will set you back 243 calories for a 44 gram (1.5 oz.) bar. You can buy it for 100 yen at most convenience stores right now.

I give it happy rating if eaten in small doses. I think the sweetness would make it hard to eat too much at once. My husband, on the other hand, would give it a "very happy" rating as he likes sweeter things and banana-flavored treats more than me.

And, yes, banana-flavored stuff is pretty hot right now. It's everywhere in Tokyo, so you're likely to see more in the near future.

Very interesting! I hope they import some to my favorite Japanese candy stores here in Canada so I can try it!

Mind in the gutter here... one size does not fit all!!! I agree, smaller more reasonable (FOOD) portions are much better.

Hi, Lost Mitten, and thank you for commenting! You might want to check Asian grocers near you. I figure KitKats are one of the things that are more likely to be exported. :-)

April Marie: It's interesting about food and portion sizes. I didn't used to believe that it would have such a huge impact, but I've come to realize that there's likely a biological imperative deep in all humans to consume all available food while it remains available. We have to fight this impulse pretty hard in modern times, and if you put a bigger quantity of food in front of someone, it's that much more difficult for them to not overeat.

The Japanese have it right, though perhaps for the wrong reasons. I think the small portion sizes (when they are small - some places still give you a lot of food and some conbini pastries are complete calorie bombs) are to save money, not to refrain from overfeeding people.

Thanks for commenting, as always! :-)

Oh, goodness. I wish there were more banana-flavored snacks here in Los Angeles. I've found some Korean brands of banana puffs (like cheese puffs, but banana flavored), which aren't that bad at all. But, I've seen banana KitKats posted on various blogs from expats living in Japan. I can't wait to try them when I finally visit the country!