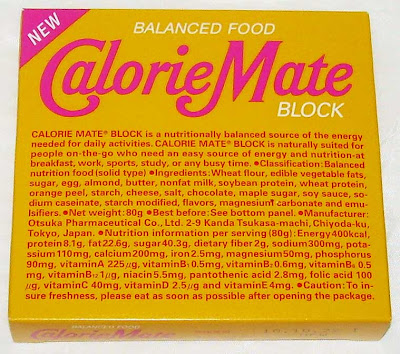 Click on this picture to see a bigger one that will allow you to read all of the ingredients clearly.
Calorie Mate is one of those things which nearly everyone who has been in Japan is aware of, and thanks to a video game appearance even those who are not in Japan may have heard of it. I'm not so sure that everyone who has seen it has tried it. I know that I had no inclination to sample it until I started this blog.

I've never been 100% sure of what the point of Calorie Mate is supposed to be, but I've always guessed that it is meant to balance people's bad eating habits by offering them a couple little fortified blocks. One of the reasons I never saw the appeal was that they aren't low calorie as a snack at 100 calories per cookie, and I eat fairly decently anyway and don't feel the need to eat this type of thing to balance my life nutritionally.

The Calorie Mate web site emphasizes nutritional balance and even provides a chart of the number of calories, amount of protein, fat, vitamins, etc. that an adult needs to maintain weight and health. For the record, the calorie count that Japanese men require according to the site is 2,650 and women need 2,050. I believe that the bars are supposed to be considered possible meal replacements if you are trying to cut calories in addition to being used as supplements if you feel you need more nutrients.

Calorie Mate is often sold in convenience stores and drug stores in Japan for around 150 yen ($1.67). I got mine from a huge display of health food cookies and bars at Tomod's drug store. Most of the other items were variations on granola bars and whole grain cookies. 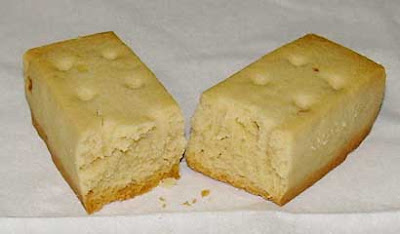 There are quite a few flavors of Calorie Mate available including fruit, cheese, chocolate, and this maple version. I chose maple because I wanted to buy a variety that my husband would be willing to try. Each cookie is 7 cm x 4.25 cm x 2 cm (2.8 in. x 1.7 in. x .8 in.) and there are 4 of them in the box. They smell strongly of maple and, well, general cookie smell. The cookies are very dry and crumbly and have a decent, though rather artificial, maple flavor. They're like a poor quality shortbread cookie. Occasionally, there are fragments of what appear to be nuts in the cookie which isn't surprising since almonds are one of the ingredients.

For what they are, these are pretty good. I wouldn't be doing cartwheels over them or selecting to have one rather than a real cookie or an authentic treat. That being said, if you want to have something cookie-like which is healthier or at least less unhealthy, these are enjoyable both in texture and in taste.

Note that there are a lot of Calorie Mate commercials on YouTube featuring Kiefer Sutherland. Since "24" is so popular in Japan, they love to show him in his headset being frantic about something or other and then having some Calorie Mate product. Here's one commercial:

I've seen the Calorie Mate logo before, but I can't remember where. Let me Wikipedia it...

Oh, that's where I've seen it. It was in the anime Full Metal Panic!

I read about the appearance of Calorie Mate in Full Metal Panic, but couldn't relate to it so I just included the Kiefer Sutherland commercial (which I had seen on T.V. before).

They sell tons of energy drinks here and have for years, but I'm actually a little afraid to drink them. They're supposed to be pretty caffeinated, and I'd not prefer to set off heart palpitations. ;-)

Glad you featured this.. It's not low in calories but it's not sweet, so I love it, I use this as a meal replacement, oatmeal sometimes gets boring, and so does Balance cup.

The ingredients are pretty far, healthy as sometimes I fear when dieting, I'm not getting enough vitamins.

Been counting calories for six months now and it's so difficult, it's nice having such a variety to choose from.

I carry them sometimes when I'm out, when I'm running around and feel hunger coming on but nothing avail, esp at work...

I like these so much better than the Cliff Bar, or the Balance bar, because it's not sweet.

If you have a chance, I would recommend the potato, and chocolate.. soy joy is nice too..

I can't do a lot of caffeine, I get relax at night and get palpitations too, but I can handle Green Tea though.. I don't like feeling wired, I would guess those energy drinks aren't good for us?

I give these to the hub as a snack during long periods of time between meals. It's more nutritious than what he might normally pick up (cookies, for instance).

I'm going to give the chocolate one a review later. I really did like the texture of these though, and texture means a lot to me in foods. I think that you really do have to worry about vitamins when you're dieting. I'm shocked that you're not skin and bones with your workout calories burned and low calorie counts!

Cheese & soy sauce & maple syrup in one product? Sign me up! (Joking)

I've tried these before, but never the maple flavor. In fact, I've tried the chocolate, cheese, fruit, and vegetable flavors (yeah, maybe I have masochistic tastebuds).

Because I actually like Calorie Mate, I recently tried another "sister" product that I found in my local store, but wow...It was beyond horrible and I literally had a gag reflex. If I ever find it again, I'll take a picture and have you try it for yourself (if you are so inclined!).

I've seen a knock-off version of Calorie Mate in convenience stores, and considered trying it, but decided not to because I could only review so many products in one week.

If you remember the name of what you tried, please "warn" me. :-)

Gained like 60lbs, and for a year I really didn't count calories, I just worked out an hour a day, 40 min was the least... so I was only losing like 2kg a month.. slowwwwwww

I got so frustrated wanting to get back to my normal weight, I started counting calories during this past summer... I thought I could just work out and it would be easy.... but calories are just as important... then it took me only 3-4 months to get almost to goal... counting the calories was key for me in speeding up the process.

I lost half the first year, not counting but working out, . but I feel back to normal, which is a great feeling.

Whoa whaat?? Keifer Sutherland does Japanese commercials?? Hehe I love him and 24!! That's so awesome to see this commercial thanks for sharing!

If I remember, the cheese version also made an appearance in the manga Wild Adaptor sometime back. I remember being intrigued by the blocky-looking substance.