This post is the kick-off to a week of health and diet snack and food reviews. Next week, I hope to explore the market for foods that are designed for people who are weight and health conscious by reviewing some of the foods directly marketed at such folks. As I've remarked before, the market is not as broad as those in Western countries, but there are some interesting tidbits. 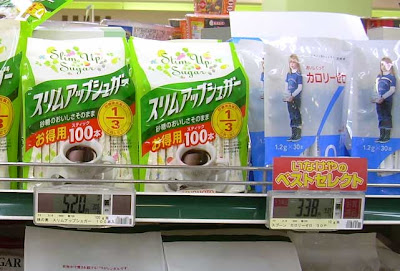 "Slim Up Sugar" and "Calorie Zero". Slim Up has a little over 6 calories per packet at a cost of 5.2 yen (6 cents) per packet. Calorie Zero at zero calories costs 11.3 yen (12 cents) per packet for that benefit. I don't know why a child is on the "Calorie Zero".
Around the New Year's holidays, I read an article about celebrations around the world for that time of year. For Japan, it said that Japanese people hang paper strips outside of their homes at this time of year to bring luck and ward off evil. While this is true in a sense, it's absolutely misleading. It's akin to asserting that Western folks around the world erect a Christmas tree as a pagan ritual at this time of year. The history is accurately reflected, but not the present situation or the thoughts behind it.

This situation comes to mind because I think that history factors into a commonly held notion that Japanese people don't use or like additives or artificial ingredients in their foods. In fact, many Japanese folks who I talk to about this will say that they refuse to use artificial ingredients, but they'll buy processed foods that include them without batting an eye. I think there was once a time when it was true that chemical additives were anathema, but it is not clearly reflected in current food culture.

Because of the myth that chemicals are not something Japanese consumers are so sanguine about, I've been repeatedly surprised by the inclusion of artificial sweeteners in many of the snacks I review. Sucralose in particular is a part of both salted (Japanese Cheetos, some sembei, etc.) and sweet foods (Pocky and its doppelgangers in particular).

The strange thing is that, while Sucralose is everywhere in the ingredients lists on various snacks, you can't buy it as a consumer level product. The only way to get your hands on Splenda is to buy it as an import. If you use artificial sweeteners in your coffee or tea, I strongly recommend that you tap the Foreign Buyer's Club for Splenda (for Sucralose) or Equal (for Aspartame). There are a variety of reasons for this which I shall soon get to. 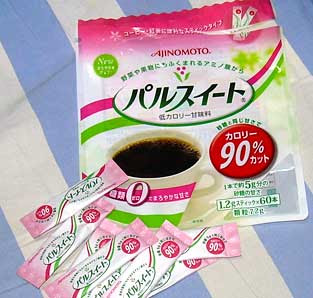 "Pal Sweet", an aspartame-based sweetener at 1.7 calories per packet. The price varies between 6.3 yen (7 cents) and 8.7 yen (10 cents) per packet.
First of all, most of the artificial sweeteners in Japan are not zero calorie. You can buy a variety which cuts the calories by certain fractions.The most popular, "Pal Sweet", cuts calories by 90%. If you want something with zero calories, you pay quite a bit more (see the picture and caption at the top of this post). Imported Splenda or Equal, on the other hand, is always zero calories and costs less than Japanese sweeteners. 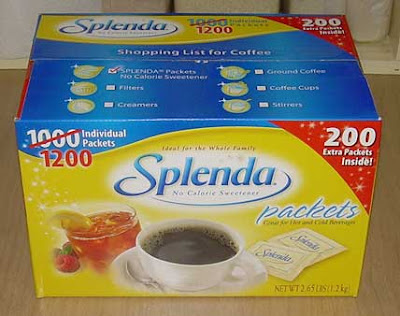 A cost-efficient case of Splenda from the Foreign Buyer's Club. The cost is 2.8 yen (3 cents) per packet and it's zero calorie. This one was even better value because it has 200 bonus packets (which I didn't factor into my cost per packet here).
Cost is the primary reason to buy the imported sweeteners. At the FBC, a box of 1000 packets of Splenda costs you 2,801 yen ($31) and a box with 800 packets of Equal is 2,080 yen ($23). I realize that's a lot of sweetener, but one can find other foreigners to split the amount with. Also, if you use 3 packets a day, that's "only" a year's supply. In my household, that's pretty much what my husband and I consume combined in our coffee for breakfast. If you compare this to Pal Sweet packets, which can be had most cheaply at Seiyu for about 380 yen ($4.21) per 60-packet bag, that is 6,333 yen for 1000 packets. Note that you can't buy Pal just anywhere for this low price. Typically, I see it for 520 yen per 60-count package at other markets.

There are other factors to consider as well and one is that, while all of the sweeteners I've mentioned claim to be as sweet as 2 teaspoons of sugar, Splenda is significantly more potent than Pal. If you use 2 packets of Pal to take the bitter edge off of your coffee, you'll only need 1 of Splenda. I'm not sure how sweetness is being measured by the respective manufacturers, but clearly something is different. If you consider that you need to use half as much Splenda as Japanese sweeteners, the cost savings become even greater.

When I first arrived in Japan, there were virtually no artificial sweeteners of any kind on the shelves. Pal, which is made with aspartame, was the first I noticed after a few years. There also was Stevia available at one time, but I rarely see it these days. Most of them are made with Acesulfame K, Aspartame, and occasionally Erythritol or Maltitol, which can have a profound gastrointestinal effect. Note that one of the other differences between foreign sweetener and Japanese ones is that the Japanese ones tend to be rather coarse and large-grained. Western-made ones are very powdery and fine. They have less bulk, but pack a bigger sweetness punch.

I will grant that artificial sweeteners are not good for your health. My discussing this topic isn't meant to make any claims about whether or not one should consume them, but simply to offer information about what is available in Japan for those who do.

If you'd like to see the diet and health products (or snacks that are healthier than usual treats) that have already been reviewed, you can see them here and here. Next week, I've got 5 new diet and/or health food items lined up for review.
Posted by Orchid64 at 12:00 AM

I'm BACK.. and gosh I've missed so much. I used to have a diet coke all the time, but I have not had one in about 9 years I think... I just consume the sugar type in moderation. It might be that I am SICK of it, grew up on it, that's all mom had in the fridge, that and Crystal Light.. lol

The hub likes Crystal Light, but I'm a fizziness addict so I'm big on soda. I don't like to drink sugar sodas because of the sugar water washing over my teeth. Also, frankly, I'd rather eat my calories than drink them. That being said, I realize that artificial sweeteners are really bad for you. I drink about one 500 ml. bottle of Diet Coke per day. On a big day (when it's hot in the summer), I might put away 2, but that's not often.

I'm glad you're back! Thanks so much for commenting. :-)

A friend of mine who lived in Japan ran into the same notion that many Japanese are unaware of the artificial ingredients in their products. Her Japanese friends were repulsed by a picture of a cake with bright colored frosting, and insisted that artificial colors were never used in Japan...

But you do make an interesting point. It's amazing how many products include sucralose in Japan. Has Stevia made it over there yet? It's just starting to catch on here.

Hi, ebidebby, and thanks for commenting!

I don't think they use artificial colors. I've been paying attention to labels for awhile now, and mostly they seem to use natural coloring (purple potato and carrot, beets, etc.), but they are less worked up about artificial sweeteners. I wonder if that's simply a reflection of the change in weight conscious behavior over the past few decades.

Stevia was here and gone in my experience. I saw it in my first 5 years or so, but now I never see it. It's odd though because Stevia is derived more naturally and you'd think it'd be popular. I wonder if people at the time it was introduced weren't drinking or eating sweetened beverages so the market was too small for it. Of course, Stevia could be sold somewhere by someone, but it's just not in my local markets. ;-)