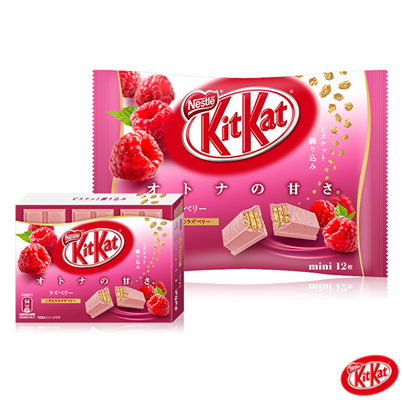 Nestle Japan is reissuing their raspberry flavor "adult sweetness" KitKat. I already reviewed this product when it was initially released. It is a pretty tasty variation and I'd recommend giving it a try if you're a fan of "framboise" or just like to try exotic KitKats in general. The packaging has been revamped and you can get it in two sizes, though both sizes contain mini bars. Candysan will be carrying both sizes for reasonable prices (it's currently out of stock, but I believe this reflects the fact that it is newly re-released and that they will have stock soon).

I'm a little disappointed that this flavor is being reissued rather than a new one being introduced, but, as I said in yesterday's review, I'm not surprised. Nestle Japan has been taking an increasingly conservative approach to its KitKat line, and probably for good reason.
Posted by Orchid64 at 8:00 AM