Nuts, corn flakes, bananas, wafers, rice puffs and crisps, potato chips, coffee beans, and grasshoppers. No, this is not a game of "one of these things is not like the other". These things are actually all alike in a particular way. All of them, including the grasshoppers, can be purchased in chocolate-covered fashion. I thought about all of the things which you can buy covered in chocolate which may or may not naturally seem a pairing with it when I pondered the idea of chocolate-covered gummy candy.

Today's reviewable comes to you (and me) courtesy of CandyWarehouse at which you can not only buy the chocolate-covered gummy candy, but also a variety pack of insects enrobed in thick chocolatey goodness. The notion does bring to mind the "crunchy frog" sketch in Monty Python, but it may seem far less alien in the future than it does now as I hear that we may have to utilize insects for protein when civilization falls in the next 50 years or so. When that time comes, you'll think that chocolate-covered gummy will be a gourmet memory and in no way inferior to any of the other more common suspects.

This isn't chocolate in the conventional sense as it's not the brown stuff, but rather fruit-flavored white chocolate. The three flavors are strawberry, muscat, and orange. The first and last seemed rather promising as those flavors pair well with conventional chocolate, but I was dubious of the muscat flavor. 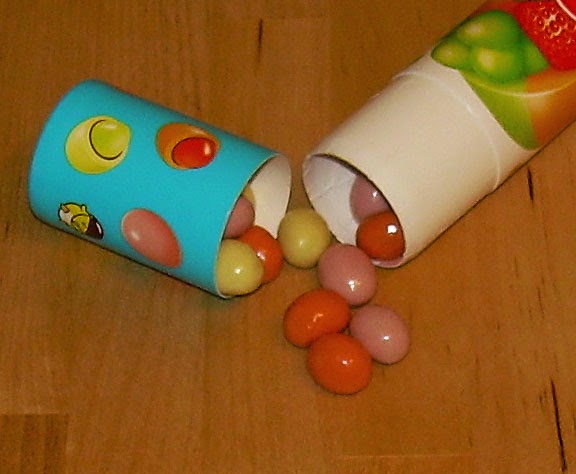 After opening the tube, I was hit with an intense fruity smell. It was surprisingly strong. After sampling each flavor, I discovered why. Each of them tastes like a child's bubblegum flavor infused into white chocolate. It is too intense and fake-tasting. The weird thing is that fruit juice concentrates as well as various fruit liquors are used to flavor these. The flavors come from real sources, but it's all a bit too intense for my tastes.

Of the three, the one that was the least palatable was the muscat. I know muscat isn't the same as grapes, but they are similar. Chocolate-covered raisins work, but have you ever seen or tried a fresh grape as part of a chocolate fondue? I'm guessing not and for good reason. The two flavors just did not mesh.

The strawberry was intense at first and ended with a strong white chocolate sweetness. It worked okay, but it was like two flavor blasts and neither was particularly tasty. On the bright side, the textural contrast of the soft, creamy chocolate and the chewy gummy was pleasant.

Orange is the flavor that I would expect the most from, but it also was far too strong. It reminded me of flavor-blasted baby aspirin. I guess that all of that fruit flavor really is packed in there.

I admire the effort put into these, and the truth is that my husband liked them. He said that the flavor really got more intense once all of the chocolate melted away, but he still liked it. I wouldn't say he loved it, and I don't think he'd go out of his way to get them again, but he will finish the tube. As for me though, I'm not going to eat more of them so that's an "unhappy" rating is for me and a "happy" one for him. He said he likes the taste and the overall experience are good for him, which is weird because he generally dislikes gummy candy of any sort. I actually like gummy candy and even have experience with chocolate-covered gummy (via Tirol's "mochi" chocolates which are actually gummy).

So, the bottom line is that how you'll feel about this is going to vary based on your tastes. I'm going to give it the two ratings it deserves.

I actually really love these and have been buying them for what feels like a decade (sheesh makes me sound realyl old!)