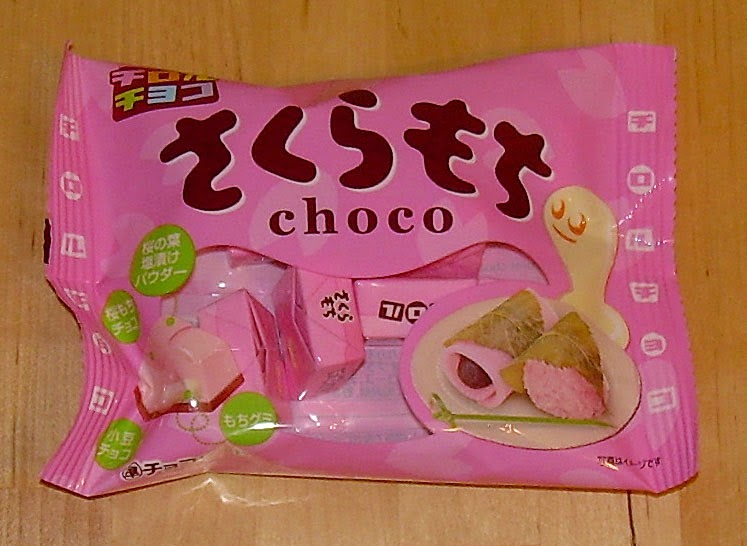 You probably don't know this, but the packaging on this candy is attempting to pander to different regional audiences. You also probably don't care, but it's my job to, as the tag line says, "tell you more than you need to know about Japanese junk food." It's not just my blog's motto. It's my lifestyle.

Let's start with what sakuramochi is. It's a Japanese sweet which has red bean paste in the middle and is surrounded in some fashion by rice cake - not the sort of rice cake that Quaker sells in stores which looks like popcorn that has been fused together in some sort of horrible industrial accident and tastes like Styrofoam packing peanuts. No, no. This is Japanese stuff, mochi, which is rice pounded into a stretchy, somewhat taffy-like substance which people can more easily choke to death on (especially old folks).

At any rate, there are two styles of sakuramochi pictured on the lower right of the package. The rolled up one with what looks like a bit of a turd poking out (such elegant prose from my keyboard) is Tokyo- or Kanto-style. The kind that looks like an innocent pink blob of fuzz is Kansai-style. Each has a sakura leaf wrapped around it. Mainly, they have textural and aesthetic differences, or at least I think that is the case because the truth is that I never ate sakuramochi in Japan. I ate plenty of wagashi (Japanese sweets) and lots of mochi and red bean stuff, but never that particular type. So, I'm not going to be checking this candy for verisimilitude to the real thing. I'm guessing that is actually for the best.

This is, obviously, one of the spring releases from Tirol. Well, it's obvious to me because spring is when everything "sakura" pops out of the marketing woodwork in Japan. It's all green tea and sakura now, with great lashings of strawberry thrown in for good measure. It's a thing in Japan. It's similar to how pumpkin flavored everything starts flooding the market in July in anticipation of Halloween in October and how it sticks around until March of the following year because they can't possibly sell a million products in pumpkin flavor in the span of time that encompasses the winter holidays. 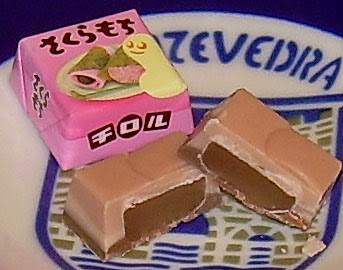 At any rate, I didn't know exactly what flavor to expect from this, but the smell caught me by surprise. When I gave it a good whiff, it smelled distinctly of red beans. There really wasn't much else to smell. The first bite into the candy yielded a moderate amount of red beans with some flowery sakura flavor. As I chewed into the little gummy center, the bean flavor asserted itself much more strongly. It tapered off and revealed a fairly sweet taste at the finish that developed the sakura flavor a bit more and made it border on, but not cross over the line into being "perfumey". The final taste left in my mouth was a mixture of both the red bean and sakura.

For a tiny little candy (33 calories, about the volume of a Hershey's kiss), this packs some complexity both in terms of flavors and textures. The chocolate part on the outside is soft and yielding. The gummy is quite chewy, bordering on a little bit too hard to bite into. There are earthy, sweet, and perfume-like elements, but you have to either eat slowly and pay attention or eat more than one to really pick up on the multiple subtle flavors.

This is not the sort of candy that you eat to stuff your pie-hole with sweeties. It's the sort of thing you eat for a unique experience. You pair it with tea, one little package next to your cup, and take the tiniest bite possible and try to discern the mysteries in your mouth. Take a drink of tea and give it another go. Repeat until you're done.

This is a good candy in a way, and a less good candy in another. It's one of those things which you would never find in the U.S. because it's complex and not necessarily easily accessible by most palates. This doesn't make it a bad thing at all, but it does make it something that you absolutely have to either already have a taste for or be in the mood for. I'm glad I bought this, especially at the relatively modest price of $2.19 at Nijiya Japanese market (for an eight-piece bag). However, I would not buy another. Once is enough.