If someone drops you in the desert with a knife, a canteen of water that'll last one day, a blanket, and three protein bars and it takes three days to get out of there, you're going to have to be pretty creative and innovative to survive. You might even come up with some unique and impressive ways to manage survival that others will find laudable.

Compare this to what would happen if someone dropped you in the desert with just one thing for your survival. In this case, it's a set of keys to a fully-stocked RV that is parked just around the corner with enough gas to get you out of the desert and then some. It even has a GPS. Who is going to care about your little adventure?

I've often felt when I'm playing a game that the most interesting time is when your character has nearly nothing to work with. The challenges are less difficult, but you have less to meet them with so you've got to be crafty. Sometimes, I look at modern cuisine and I think that we have too many options and the results are far less impressive that our ancestors came up with when they were working with fewer ingredients and cruder tools.

Amaretti are small, crispy cookies made with almonds that are sometimes referred to as "macaroons". They were first tracked in Italy during the Renaissance and there are varying recipes. Most American recipes that I've read include almond extract. 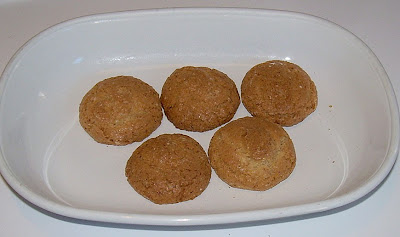 They are called "macaroons", what they remind me of more than that are meringue cookies. They have the same sweet crispy quality with the added benefit of nutty richness. Their ingredient list is quite small, usually consisting of egg whites, sugar, and ground almonds or apricot kernels. This simple recipe yields an immensely satisfying cookie which has both flavor and textural delights.

This mass produced amaretti, which I picked up for a mere $2.19 at a Russian market that carried world foods, includes "flavours", milk solids, and baking soda, so it's not quite the classic recipe from days of old, but it doesn't seem to be greatly modified. Whatever the case, these are delicious amaretti that are shelf stable and don't lose their crispiness even after the rather airy package has been opened. They cleave easily and almost melt in your mouth.

They're not as dry as meringue cookies, but have the same textural quality that makes them crumble apart a bit like honey comb. The combination of a good shatter and the melting quality make these satisfying on two fronts in terms of texture. The amaretti flavor can be a bit intense, but I love it, and I loved these cookies.

The truth is that I haven't met an amaretti cookie that I didn't like, but these were definitely more modestly priced than some. They were also the sort of thing which I rarely located in Japan and aren't incredibly common in the U.S., but also not difficult to find either (at least not in my area). I loved these, and I wish I'd bought 3 packages of them, especially since 5 small cookies are only 97 calories and I can feel pretty indulgent.

Some Renaissance cook was dropped in the desert with very few ingredients and made something amazing. I'm glad he or she didn't have more to work with.