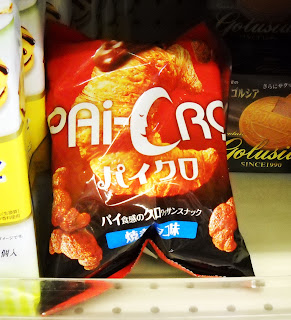 I bought a chou cream dessert when I was living in Tokyo called "Pai-Chou". If you can't parse that phonetically, it sounds like "pie-shoe". It was called that because the chou had a portion which was like flaky pie. I told my husband that "pai-chou" sounded like the name of a Chinese girl. I said that because I don't know anything about Chinese names and I remembered once hearing the word "pai gau". I don't even know what that means, but I associate it with China. Such are the types of things you think when you're completely ignorant of a culture and your febrile mind just makes things up.

Seeing this "pai cro" reminded me of my former stupidity. This is a new line of products by Kanro which are supposed to remind you of croissants. Currently, there's the chocolate version sold here, a "sugar-butter" version, and a brown sugar one. I passed on this because these things never end well. Croissants are awesome things and some shelf-stable mass-produced snack is only going to disappoint.
Posted by Orchid64 at 8:00 AM