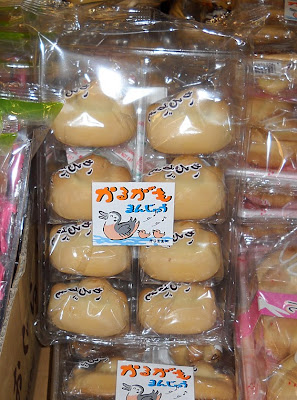 When I was a kid, if someone had told me that, some day, I'd be standing in a store pondering whether to choose cakes filled with sweet beans that were shaped like ducks or bunnies, I would have thought they were insane. What sort of peculiar dystopian future would lead me to make such choices?

Nonetheless, there I was in a Japanese market, faced with said choice and this was the one I did not make. These are "garugamo" or "spot-billed duck" cakes. The reason that the bunnies won the contest was that they were filled with white beans and the ducks were filled with red ones. While I'm fine with either type, my husband only sanctions white beans and I wanted someone to help me eat the lot of them up. Also, frankly, the bunnies were cuter and who doesn't like their food to be as adorable as possible?
Posted by Orchid64 at 8:00 AM