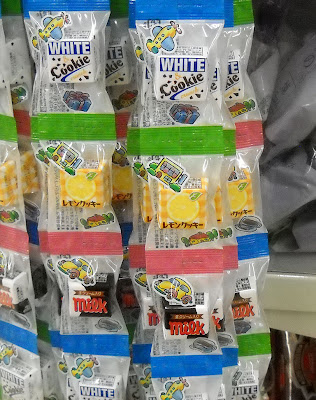 For those who don't know, Tirol sells little square chocolates in two styles. One is a "premium", which is a 1 inch/2.54 cm. square that sells for about 20 yen (20 cents) per piece. Those are the more sophisticated versions. The other is a smaller version, about 2/3 the size of the premium one, and is sold in various variety packs. Most of what I get my hands on these days is the small stuff. The easiest way to get them is in long strips of nine. They are often sold in Japanese markets in my area for a little over $2. It's not a bad deal, even though it is double the price for such things in Japan.

The main issue with them is that they always use boring flavors that I've had many times before and put in just one new flavor. In the case of this package (nine candies), three of them are "white cookie" and three are "milk". The new one, which comprises the final three, is lemon cookie. I never want to buy six that I've had before and find okay but not fantastic in order to get one that I would like to try. This method probably works pretty well for Tirol with kids (who I believe are the main market for this), but it isn't flying with this jaded old lady.
Posted by Orchid64 at 8:00 AM

Sound nice too bad I've not come across these myself

I loved the tirol that comes with a coffee ....whatever you call the gooey coffee centre.
Actually I miss the coffee flavours of Japan. I remember when I could get espresso flavoured hi soft here....ah, so long ago.