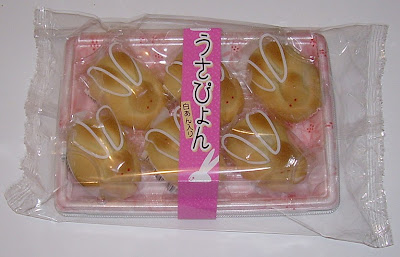 There's this thing in America where the kids like this singer named Justin Bieber. I'm not sure what the appeal is because he looks like just another pretty boy teen idol to me, but his face is all over school supplies and he gets mentioned a lot here on the web. It's one of those things which I'll never really "get" because it's a corner of pop culture that I have no interest in exploring.

In Japan, similarly, there was a large swath of the pop culture that I knew nothing about and that was in anime. Had I followed it, I would have known what "usapyon" meant. I knew that "usagi" meant "rabbit". "Pyon", apparently, is the sound a rabbit makes in Japan. Animals make the same sounds in every country, but the way humans hear them varies. I looked this word up and there's a character in a cartoon that translates to something like "pretty cure" that is called "Usapyon". It's a stuffed bunny toy that comes to life for some reason every once in awhile. So, now, I understand why these bunny-shaped cakes are named "usapyon" instead of something like "usagi-ju" or the Japanese equivalent of "bunny bun".

I found these cakes at Mitsuwa Japanese market for $4.99. That is actually on the cheap side for bean cakes. They were on sale, which may mean that they won't be around for long or simply that I got a good deal the day that I was there. This brand of bean cake was one that I never encountered in Japan, but that's no shocker. There are myriads of little manufacturers and bakers who have limited market penetration and the chances that you'll encounter all of them or any particular one is pretty small. The same goes for the U.S., and I'm sure other countries.

I chose these not only because they were reduced in price, but also because they have white beans in them. It's actually somewhat challenging to find something which doesn't have red beans. The main difference is that the white ones are milder in flavor and lack the earthiness of the red ones. These carry more of the flavors of the other ingredients. 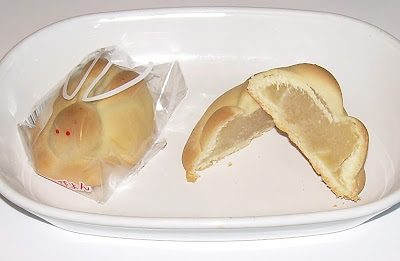 The bunny "ears" and "eyes" that you see are only on the plastic package. Once they are removed, the "bunny" is represented by bumps alone. Inside is somewhat soft, tender mashed bean that has been mixed with sugar and other flavors. One of the ingredients is condensed milk powder, which may be lending sweetness and richness. They have more of a sweet, floury, baked good sense to them. They remind me a bit of vanilla pancakes without the syrup. Though sweeter than a red bean cake, they are not as sweet as most cakes and cookies.

I really enjoyed these and would definitely buy them again. They brought back very positive memories of my time in Japan both in terms of the adorable form factor and the taste.

Love the blog! When you get imported bean cakes, are they usually just on the shelf, refrigerated, or frozen? I've seen some in my local H Mart that are refrigerated and I'm wondering how long they keep.

There are two kinds of these cakes. Some are on the shelf and some are refrigerated. The type with a cake-style outer coating (like these bunny cakes) are usually just on the shelf. I've never seen them frozen.

Usually, the type with a mochi shell are frozen and, in my experience, don't seem to suffer much for having been so. In fact, if it's mochi, freezing may help it keep better as mochi suffers rapidly from a loss of its textural delights if it's exposed to air for too long.

I think that frozen ones can keep as well as any other food in the freezer, but I certainly wouldn't want to stretch the limits on such things. Generally, I buy to eat within a week and don't thaw them until I'm sure I'll eat them immediately.

Thanks for reading and commenting!

Do you know if these contain wheat flour? Thank you!