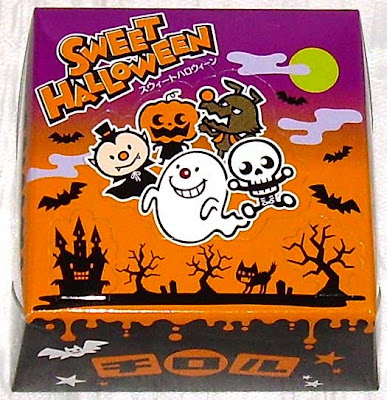 Have you ever seen a more adorable or happy-looking skeleton?
I love bright, vivid, clean graphics. Even if I wasn't keen on the candy in this Tirol Halloween box, I'd want to buy it for the bold, clean look. You may not be able to tell from the picture, but parts of the box (the ghost and other creatures and the trees) are perforated so they can be popped up and the box can be used as a little Halloween decoration or display. As it turned out, my husband picked this up at New Days convenience store (for about 210 yen or $2), so the choice wasn't really in my hands. 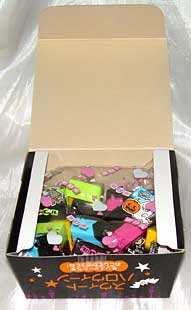 This is the second of these bright, attractive boxes that I've reviewed (though there have been at least several others which I've passed on). The other one was the W Purin one, and it was actually quite good. I have much lower expectations of these flavors because 3 of them are repeats of flavors that have appeared in less slick variety packs in the past (and 1 was a former 'Premium' candy), and I have reviewed 2 of them before. 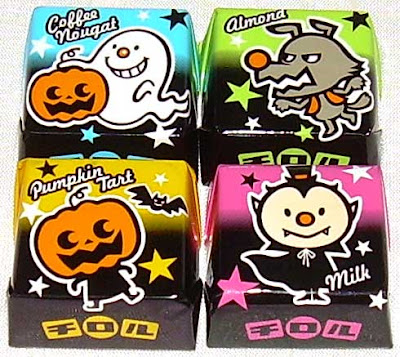 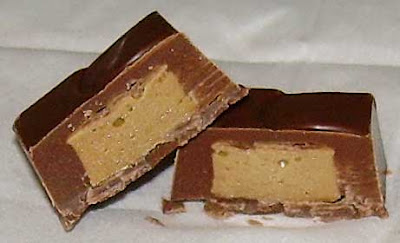 This smells like milk chocolate even after it has been cut apart to reveal the firm nougat center. At first, you get the milk chocolate flavor, which is your average Japanese milk chocolate (which is to say, on the bittersweet side). The chewy coffee center comes in at the end very strongly when all of the chocolate has melted away and you chew on the toffee-like coffee center. The coffee flavor is similar to fairly decent quality instant coffee and not too strong. I wouldn't necessarily crave this, but I wouldn't mind it either. It wouldn't compel me to buy a box, but I'd certainly eat the ones that came with a variety pack as they are enjoyable enough for the calories. 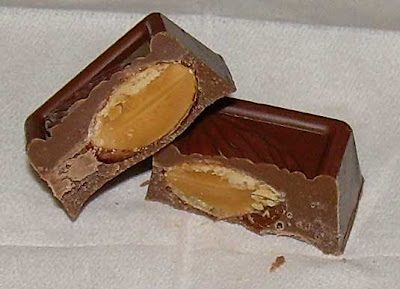 This is the same almond as is included in other variety packs. Since I liked it before, I still like it now. It smells like milk chocolate or cocoa powder. It tastes like pretty decent milk chocolate with a super crispy deeply roasted and crunchy almond. There's a nice mix of almond and chocolate flavor but a bit of a bitter aftertaste from the chocolate. 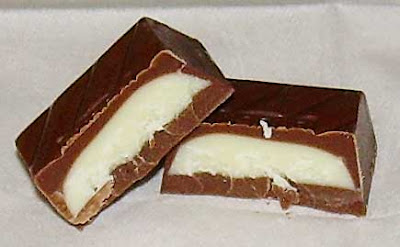 This is a milk chocolate shell with a "cream" filling according to the package description. One of the ingredients is "cream powder", but it doesn't taste much like cream and is similar to actual milk. There's an unusual taste to it, and I believe it is mirin (Japanese sweet cooking rice wine). It's a very milk influence, but it gives it a light liquor flavor. This is pretty good, though rather sweet. Some may find the mirin flavor off-putting or odd though. 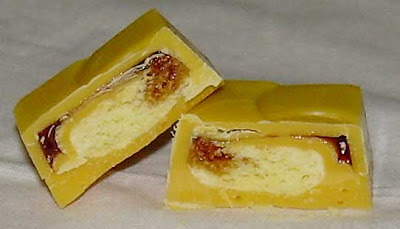 When I reviewed the premium version of the pumpkin Tirol, it had the same pumpkin coating and cookie center, but it didn't have the "soy sauce" that this has on it. I mentioned in the former review that I thought the pumpkin needed some other seasoning to offset the sense of it being a very sweet squash flavor. It seems Tirol agreed since they added this sauce to the latest incarnation. The variety pack versions are usually smaller, but also simpler than the premium ones, so this sauce was a surprise. Soy sauce in candies often tastes a lot like maple syrup. It is thickened and sweetened and this seems to turn it from soy- and salt-flavored to maple syrup-like. This was good, but my least favorite of the bunch. It still seems like sweetened squash to me, but at least this has an added dimension.

This is a nice collection, and I really love the size of these. I like to have just a bite or two of something sweet after lunch and one of these generally does the trick without making me feel overly full or like I've just piled on more calories on top of lunch. This is a more desirable combination of flavors without any stinkers in the bunch than some of the other variety packs I've sampled. I'd definitely buy this again if it came around next year for Halloween. I only wish that I could find a reason to preserve the box and wrappers because they're insanely cute Halloween graphics.
Posted by Orchid64 at 12:00 AM

Pumpkin is one of my favorite flavors of all time = ) I could have it with anything really, ice cream, candy, choco....

I love pumpkins, and I love Halloween iconography. This one looks like a winner.

Gorgeous box! Never seen one so cuuuute! So jealous ;)

These are the cutest! It's odd that they changed the Pumpkin Tart filling but not the wrapper.