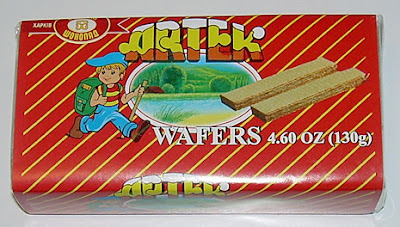 From my extremely limited experience with Russina sweets--that is, two whole reviews--I have already learned something. If there is a "P" in their writing, it means an "R" in English. That being said, you'll note that the picture of the package shown above does say "Artek". The sides, however, say "Aptek" as does the Russian product information. Look ma! I'm learning Russia through junk food! Who ever said that this stuff is bad for you?

I found this 130 g./4.6 oz. packet of chocolate wafers at Crossroads Specialty Foods. This was the same place at which I procured the tasty Russian butter and cream cookies. Like those cookies, these were very cheap at 99 cents (about 100 yen). Compared to cheap store brand wafers which you can buy seemingly by the pound for about a buck, these might seem a little expensive, but they are cheap compared to other European wafers. The question is about quality.

It should be noted that I am an enormous fan of wafers of all sorts. I like bad ones, sweet ones, bad ones, high quality ones, vanilla, chocolate, fruit flavors, etc. Because of the light, crisp texture and my being a texture junkie, it's hard for a wafer to go wrong with me, though there is absolutely a threshold at which the calories are not worth the experience. If I didn't have the metabolism of a moderately active middle-aged white lady, I'd eat whole packages of wafers no matter how flavorless they were. I can say that with confidence because I had more than my share of experiences in Japan with said types of wafers and making a package of them "dinner". I'm just too old for that now. Neither my metabolic rate nor my digestive system would tolerate such happy nonsense anymore. 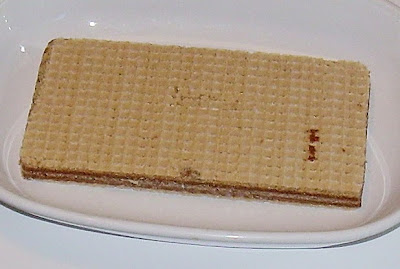 Fortunately, these wafers are well worth the 115 calories per half wafer. That may sound stingy, but this package only contains three very big wafers. If you were to divide them into more standard size ones, they'd probably each make three or possibly four more American or Japanese size ones. These shine above the conventional in a few ways. First, the ratio of filling to wafer is very good. Japanese ones were often too stingy on the filling. The filling is flavorful, fatty, and even creamy. It's a bit closer to ganache than your average wafer filling American ones are too sweet and chalky in their filling. The wafers themselves are fresh, crispy and satisfying.

These remind me of the venerable Loacker variety, though those are much more airy than these. There's more heft to these, but they aren't especially dense. The thicker, creamier filling stops them from being too hard.

I thought these were excellent for a consumer level wafer. If you gave me a selection of all of the wafer cookies I've ever had, including all of the sugar wafers I can try in the U.S., I'd choose these. considering my appetite for wafers, that's a pretty ringing endorsement. That being said, I'm judging these as a wafer among wafers, not as a snack among all other snacks. I'd still take a mont blanc or a good bit of cheesecake over something like this, but it's unfair to hold a cheap consumer level shelf stable sweet up to freshly made pastry.

This line of wafers, though not this particular presentation, is available online from the Russian Table.

Look for Napolitanke wafers from the Croatian brand Kras; they might be hiding out at your Russian store. They come in a bunch of flavors from lemon to rum to chocolate-covered, and all of them are delicious. Here's a glowing review written by a fellow wafer fan.

I will absolutely look for them! Thanks for the heads up!