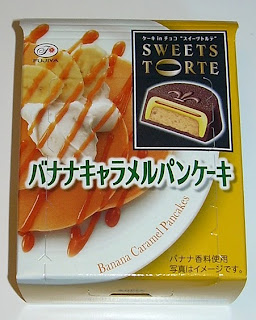 I've been crazy for pancakes since coming back to the U.S. I did have them occasionally in Japan, but I tended to not eat them too much because the syrup had about, oh, a billion calories in it and a pancake without syrup is simply fluffier bread. One of the reasons I crave pancakes here is that I can buy sugar-free syrup. Besides being carcinogenic, it weighs in at about 30 calories per quarter cup whereas the real stuff is 240 per cup. That makes it a lot easier to eat pancakes without going up a size.

Since I've been on a pancake kick lately, these chocolates caught my eye. I was certain that they'd taste just like a banana pancake because I'm just that stupid. The main problem with anything "pancake" flavored is that it's missing the essential element and that is the texture. More often than not, "pancake" means maple syrup and I was hoping that wasn't what this was going to be.

The "sweets torte" line by Fujiya is an attempt to make a fairly complex and sophisticated chocolate for the consumer market. To that end, they tend to layer a little cookie with a few kinds of chocolate and syrup. This should add in multiple flavors unless they all happen to come together into a melange of horribleness. 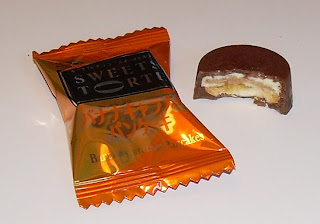 Fortunately, I can say that this keeps at least some of it's flavors distinct. The first thing you get is the outer chocolate coating following by something which is reminiscent of an actual pancake's taste. The kicker is a banana flavor. Unfortunately, it's a little too strong and knocks out that hint of actual pancake flavor pretty strongly.

This is not a bad chocolate. It certainly is interesting and has some complexity. However, the banana part is a little too strong for me and these are somewhat expensive candies. I can't remember what I paid for it, but it was between $2.50-3.00 for a tiny box with 5 individually wrapped pieces. As a one-time novelty, I don't necessarily regret trying it, but I wouldn't buy it again.

This looks quite good to me... I guess I am craving some Japanese sweets.
I went to J-Town (the complex of Japanese shops in the north end of Toronto) and had Tonkatsu. I also bought a bunch of Hi-chew candies. They import these from Taiwan as they are half the price of the Japanese made ones--I like the new cherry flavour, but wonder why can't I get orange.
I was craving Hi-soft caramels but they didn't have any. Do they still have the espresso flavoured ones? I haven't seen them in Canada for several years.

They do look and sound good, but they didn't really live up to expectations.

I saw cafe au lait Hi-soft in Japan. Perhaps those are the "espresso" variety?