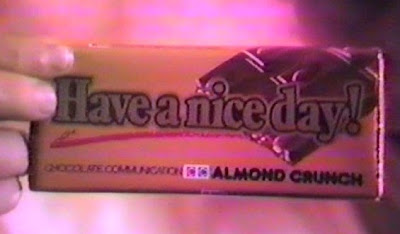 Sometimes I see YouTube videos of commercials from decades ago and I wonder where on earth those came from. It's especially curious when I see things from the 1970s because there were so many commercials and so few VCRs at the time. Some of those videos, clearly, were transferred over from old video tapes. You can tell by the quality. Did someone just find some old videos lying around of TV shows and they decided to capture them? Who does that sort of thing? 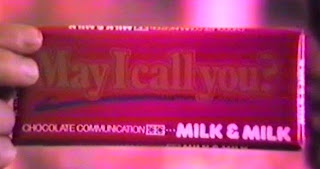 Well, ironically, I recently got my hands on some old videos that my husband made in 1986. Besides his presence on the tapes, there is also a little cameo from his sister who had just celebrated a birthday. My future brother-in-law had sent his sibling some things from Japan as gifts, including quite a few chocolate bars called "Communication Chocolate".

From that video, I was able to get captures of these bars, each of which has a phrase in English written on the front and a very typical list of ingredients in Japanese on the back. At one point, my future husband asked his sister to turn the bar around so I could, indeed, see the Japanese writing on the back. Despite the fact that these look very much like they were made for a country in which English is natively spoken, I assure you that they are 100% Japanese. 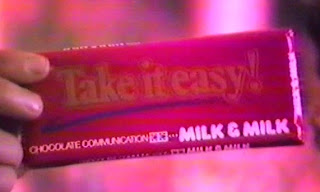 One of the questions that my future sister-in-law had about these was why are the messages written in English. I know from long experience in Japan that most Japanese people don't care about the meaning of the words, but are focusing on the design. That being said, I think most of these are sufficiently simple phrases that they could be understood by most people who had completed high school. She also speculated about whether or not the phrases were explained in Japanese on the back. From what I could read through fuzzy video, the back only talked about the chocolate itself.

There is even a little bit of a "review" of these bars on the video. My husband's sister wondered if the chocolate was going to be bad because the focus appeared to be on the packaging. She sampled the almond crunch bar and said that it was good though a little different from American chocolate. 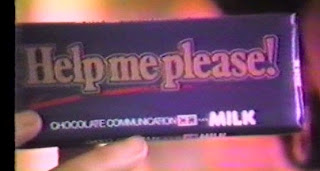 The question about what the purpose of these bars was also came up, particularly in regard to the bar pictured above this post. This bar in particular made the circumstances for buying them clear. This bar would be given to someone who wanted help with work or some other task. It may sound like a cry for help, but it's actually pretty easy to see someone giving one to a teacher, a coworker, or a friend as part of a request for a favor. Of course, several of these bars are designed to be given to potential or current romantic partners.

I tried to find something more modern that was like these bars, but came up empty. If you've seen an updated version around, let me know who the manufacturer is. One piece of information that I did not get from the video was what confectioner produced them. I hope you enjoyed seeing 27-year-old chocolate bars from Japan! This is probably the only place you're likely to see them... unless someone else has home video of a similar gift.
Posted by Orchid64 at 8:00 AM