When I saw this box on display at a Korean market, the English sign in front of it said, "Black Sandwich Cracker". This intrigued me because what is pictured on the box resembles a knock-off of an Oreo cookie, not a cracker. I wanted to know if the contents of the box actually were cracker-like confections and it only cost me 50 cents to find out.

When I got home and started looking more carefully, I saw that these are made by Japanese snack-making power house, Lotte. In fact, if you peruse the Korean web site, you'll see that there is substantial product overlap between countries including Ghana chocolate bars. I think that products produced for both countries are essentially identical. However, I could not find a chocolate sandwich cookie (or cracker) option on Lotte's Japan site. Perhaps they threw in the towel in that market and gave in to Oreo.

The main benefit of these cookies for me over Oreos are that they are sold more cheaply and in a smaller package. The first time my husband and I bought a standard size package of Oreos after returning to America, it took four months to eat it all. The second time, it took longer and we had to throw the rest away. It's just too much cookie for a couple of people who aren't gobbling them down like a crazed 8-year-old. 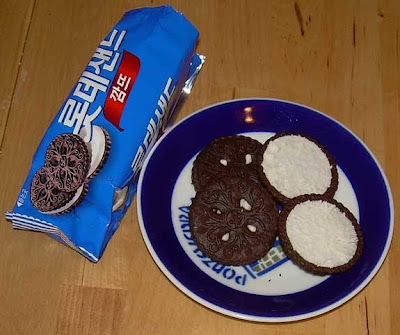 Of course, a 50-cent box is unlikely to live up to the greatness of Oreo, right? Well, maybe... The truth is that these were very good cookies. The bitter chocolate cookie exterior was flavorful and had a good texture. It lacked some of the fatty, crumbly nature of an Oreo, but it did not go anywhere near "cracker" territory. It was a more than serviceable cookie with just enough cream to make it interesting without making it too sweet or cloying.

Frankly, for my tastes, these were better than a standard Oreo, but I'm guessing those who are into double-, triple-, and whatever multiple numbers of "stuffs" they enjoy in Oreos will find the filling amount paltry and insufficient. It truly depends on how sweet you like your cookies. Oddly, the calorie count is not enormously lower despite the lesser sweetness and white stuff. The cookies are 45 calories each, but are smaller than an Oreo.

I wouldn't say that one should bust a gut scrambling down to the local Korean market (I got these at a place called "Super Kyo-Po Plaza"), but I'm guessing you could get them at any Korean market... provided you have access to one. I certainly would buy them again if I wanted to have an "Oreo" cookie around. They're not "better", but they are different in a way that suits my tastes (and pocketbook) better.

Do you have any Indian/Pakistani markets around? They sell Bourbon biscuits, delicious chocolate-creme chocolate sandwich cookies topped with big sugar crystals. I swear the chocolate tastes like Cocoa Puffs or something, sweet and light. The cookies themselves are small, and you can get them in little six-packs--perfect for two casual snackers.

There are some of those places not too far away - off the beaten path, but not bad. I've been to several of them and there is one enduring frustration - they seem to never put prices on things! I hate to have to walk up the register and ask how much something is again and again, so I tend to simply not buy anything from them.

I did buy some sort of children's biscuits at an Indian market that I really liked at one point. When I run across them again, I'll do a review.

You can put oreos in the freezer and they last forever. That said, i find oreos much sweeter than i remember them from childhood.

You assume my freezer is chock-a-block already with "real" food. ;-)

Seriously, I can't cram anything in there that isn't really useful to keep around. The Oreos, alas, must languish!