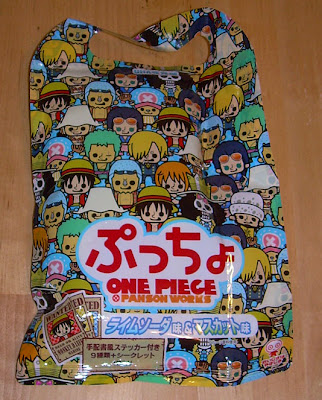 Consider a hypothetical Japanese business man who is transferred to the United States for about 10 years. He wasn't interested in American-style football before he came to the U.S., but he gradually develops an interest in it, comes to understand it, and attends some games. He can have conversations on the topic with native fans. While he doesn't like all American food, he does give various dishes a chance and settles on a handful that he really enjoys and partakes of regularly. While not totally integrated with the culture, he has found and has an affinity for aspects of it to varying degrees.

Around his 7th year in the U.S., he has a conversation with a Japanese colleague back home and this fellow asks him if he has ever been to Comic Con or visited a gaming or comic store. This coworker, who lives in Japan and has never been to the U.S., is an enormous fan of American comics like "Spider Man" and "X-Men." When the businessman says that he has not had any experience with comics or comic-related culture, his coworker scoffs and says, "America is wasted on you."

I'm offering this little hypothetical story and asking the reader to pause and consider their impression of the Japanese coworker's attitude toward his colleague who is residing in the U.S. Now, I'd like to ask you to replace a few of the details. Instead of "Japanese businessman", substitute "Orchid6" and instead of "football", think "sumo". Finally, instead of Japanese coworker, put in "fellow American blogger" and for "Spider Man and X-Men", sub in Japanese anime and manga.

When I was living in Japan, I had zero interest in Japanese comics. When I was in my late 30's, I was told that the way in which I did not partake of this one particular aspect of Japanese culture meant that "Japan (was) wasted on you". Yes, because if an adult doesn't embrace just that niche of interest that another adult does, he or she is missing a very important boat.

The snarky attitude of a geeky American was not enough to incite any interest in Japanese comics for me, but a talk with a student who I respected and liked was. A former student, a nurse, said that she borrowed and read the "One Piece" comics that one of her friends collected. At first, she thought they would be childish, but she got hooked. The fact that it involves, at least in theory, pirates, didn't hurt. So, I went online and watched some of the available "One Piece" cartoons that were based on the comic books. 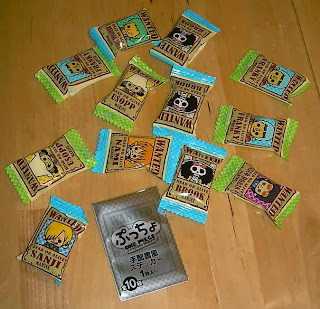 The truth is that I hated it. I found the whole thing grating and relatively incoherent. I'm sure that there's something in it for people who aren't me, but it just didn't do anything for me. That being said, "One Piece" is incredibly popular in Japan and "goods" related to the series are everywhere. The fact that UHA would make a candy themed after it is no surprise. The surprise would be that they could afford the licensing fee.

Before I get any further, I should note that this little bag of interest came to me courtesy of Candy Japan. I reviewed their service previously, and they send out two "surprise" packages per month for a subscription fee of $25. They put as much into a standard Japanese envelope as can fit and they had to make a good effort to cram this in there without mangling it (and a very good job they did of it), because the bag is actually 1/3 bigger than the envelope. I have to give them credit for living up to the "fitting" into the envelope promise which is a part of their service as well as offering something colorful and intriguing.

To appeal to "One Piece" fans, this packet has various characters depicted on the packages of the "puccho" candy as well as a foil-wrapped sticker. My sticker depicts the "Roronoa.Zoro" character and looks pretty much the same as the packet design of the candy with his image. I believe that there are 9 sticker designs that mirror the packets plus a "surprise" one, but I may be misunderstanding the description on the front. Of course, you have no way of knowing what the sticker will be, which would encourage you to buy many more of these to collect them all.

Incidentally, Candy Japan includes a non-food surprise with most of their packages. My guess is that the inclusion of a sticker with this is a substitute for an additional item this time. That's fair enough, especially given how relatively cramped the package was getting this resealable plastic bag of candy (which is really a nifty little Japanese thing in and of itself - you could reuse it if you were careful with how you opened it - and I was). 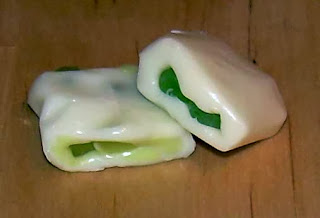 The candy itself is a type that I've seen many times, but never bought. "Puccho" is a taffy-like candy with little bits of other things in it, usually gummy. There are two flavors in this bag - lime soda and muscat. I didn't pay exquisite attention, but I think that the muscat are in the blue wrappers and the lime in the green. There are twelve candies in all and appear to be six of each flavor.

Lime soda: Just out of the package, this was a bit hard to chew. There seemed to be a few gummies crammed inside, but once it's in your mouth, you can't distinguish between the taffy and the interior filling. After it warmed up a bit in my, it was much more pliable and enjoyable to chew. It releases a nice, citrus-like burst of lime that is perhaps just a bit too well-tempered by sweetness, but only after you've been chewing for awhile and the taffy exterior has released more of its sugary load. This was a bright, eye-opening option, though it left a lingering sweetness in my mouth that I needed to wash away with a drink.

Muscat: This was also crammed with gummies, but they were smashed up a bit more such that they formed a chewy fruit-leather-sandwich layer. The muscat (a kind of grape) flavor was quite good and had the same sort of flavor that I associate with the large, purple grapes that are sold in Japan. I liked this better than the lime soda and would have been happy with a whole bag of these. It had a non-alcoholic wine feel to it because of the richness of the grape flavor. It also seemed to carry the muscat flavor longer and have less cloying sweetness to pull it along. However, by the end, I still had the sense on my tongue that I'd been sucking on a grape lollipop for awhile.

Some candy is what you want to eat all of the time until the bag is gone. Some is for when you're in the right mood for it. This is definitely a "mood" thing, as many fruit and taffy candies often are. There's nothing wrong with this, but I think the greatest value is in the very colorful novelty of the packaging, the little toy surprise, and the wrappers. You don't even have to be a "One Piece" fan to like the designs, but it probably would make you feel that getting this for half of your subscription price was even more worthwhile.

If I were rating the overall appeal of the package, I'd be giving this a "happy" rating. However, I'm only rating the candy itself. I'll be finishing the candy slowly over time, but I don't think I'd buy "puccho" again. I will, however, be saving the sticker and plastic bag that these came in just for fun. They're nifty little souvenir-type things from Japan.