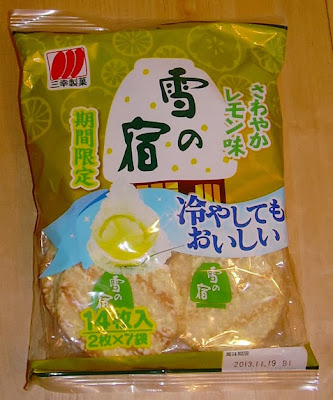 There's an episode of Monty Python in which people rather inexplicably keep saying "lemon curry" in a very quizzical fashion. I must say that I feel the same way about the concept of "lemon sembei". Since sembei can be sweet, it does have permission to be so, perhaps this isn't so strange, but I have to say that this is the first time I've run across this particular flavor. When I saw it at Marukai Japanese market for about $2.30 (about 230 yen), I couldn't resist despite the potential for disappointment.

These crackers are kin to Sanko Seika's venerable "Snow Inn" line of frosted sembei. I've reviewed them somewhat unfavorably in the past, but the general flavor concept is starting to grow on me. In fact, I may revisit the original Snow Inn crackers at some point in the future. 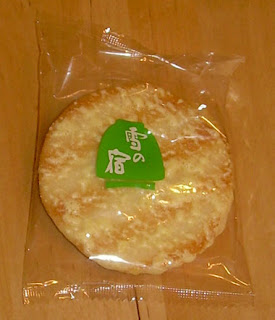 When you open the packet, they don't smell especially lemony. The first bite reveals just a hint of lemon flavor and a very modest tang. This is a salty sweet with a decent balance of both. Instead of them coming together in a battle royal, they sit quietly in their play pen making up new and imaginative flavor games. It's not a flavor punch, but I think it works well with its subtle flavor tones.

This was unique, but not in a bad way as such things can be. I was very surprised at how well it all came together, though there is a bit of a sense of disharmony when the "baked rice" flavor of the sembei comes through and it's mixed with a twist of lemon. However, once I got used to that concept, I really enjoyed these. They may not be everybody's cup of tea, but if you like lemon and sembei, and have a marginally adventurous palate, I'd recommend giving them a try. They're also only 53 calories per two sembei packet. That's a pretty good deal.

Incidentally, the yen is getting a little weaker and prices in Japanese markets are going down. I noticed when I went to Marukai that things were looking a little more affordable. This is bad news for folks working in Japan, but good news for those of us on the other side of the ocean buying stuff as imports.

I've tried tons of strawberry KitKats and I probably won't be reviewing any others. The main reason is that they're all very similar and I'm not a fan of strawberry chocolate to begin with.

The "nutshell" conclusion about all of them is that they are quite sweet and taste adequately of strawberry, but are often too cloying.

Here are some of my strawberry KitKat reviews which you may find of interest:

Recently I've found myself really into sembei. At the nearest grocery from our house they sell them in a pack of 8 individual sachets with 2 pieces in each and I, lacking the self control proper for the average 20 year old end up opening 4 in a day. There is very few selection on the flavor(Salt, Corn and Spicy are the only ones I find on offer)I've tried all three but I still prefer Salt (Which I believe is simply plain sembei, I don't understand why they label it as a sort of flavor) It is very interesting to see that there are other ones I haven't tried yet. (Fruit flavored at that!)I've always tagged sembei as a sort of savory snack despite having a relatively fair amount of sweetness to them. I hope you review more sembei! Thank you for this interesting post! :)

Camille: In Japan, things are often labeled as "salt" flavor. I think this is just a cultural habit. In the U.S., we assume "plain" means salted. Perhaps somewhere in the history of sembei, there were unsalted ones? Or, more likely, the ones that are brushed with soy sauce are "shoyu" flavored and have no added salt so they distinguish? It's an interesting question.

Some sembei is absolutely just sweet. There are two that I love. One is brown sugar cream and the other is kinako. There's nothing savory about them! It's unfortunate that you can't find more exotic flavors at local stores!