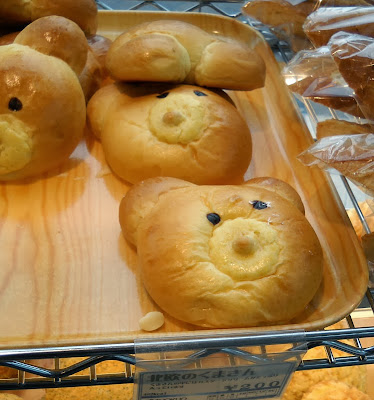 One of the things which I liked about Japanese bakeries was the tendency to fashion their bread products in the shapes of animals or characters. Where I was born and raised, I don't think we ever had what would be considered a "real" bakery and my first experience with this sort of bread artistry came in Japan.

Upon returning to the U.S. and learning that they actually do such things here as well, I was a little less impressed, especially with some of the more mass-produced-looking results such as the bears shown above. The one in the front looks like he has been punched in the snout. The one behind him looks rather deformed.

I never really thought much about it, but I wonder if Japanese customers would avoid malformed character bread. Since Japanese consumers are renowned for their fussiness, it would make sense that they would prefer not to get a mutant bear bread. After all, if it's not pretty, what's the point of getting a shaped bread at all? Considering that these are small (about the size of your palm) and cost 200 yen (about $2) each, I'm not sure it's worth paying the somewhat premium price for substandard work.
Posted by Orchid64 at 8:00 AM