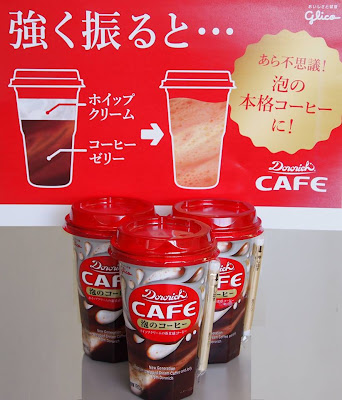 I sometimes wonder if some sort of "assembly" is supposed to make a food more attractive to people or if it just is all about creating a unique end product by not preparing everything beforehand. This product has a layer of "coffee jelly" on the bottom and whipped cream on the top. You're supposed to shake the snot out of it and then some sort of fluffy, foamy beverage that you will be impressed by. Personally, I've never found the notion of drinking thin gelatin mixed with whipped cream through a straw a very enticing proposition. Of course, it's also not something I've ever thought would be offered to me either.

The truth is that coffee jelly in Japan is actually quite good, especially with a little whipped cream on top. However, I'm not sure that I'd like this considering that it's good because you can get the textural contrast between the gelatin and cream as well as the flavor variation between the bitter coffee jelly and the lightly sweet, milky cream flavors. By mixing them together, you're killing at least half of the fun.
Posted by Orchid64 at 8:00 AM

Are they sold online?