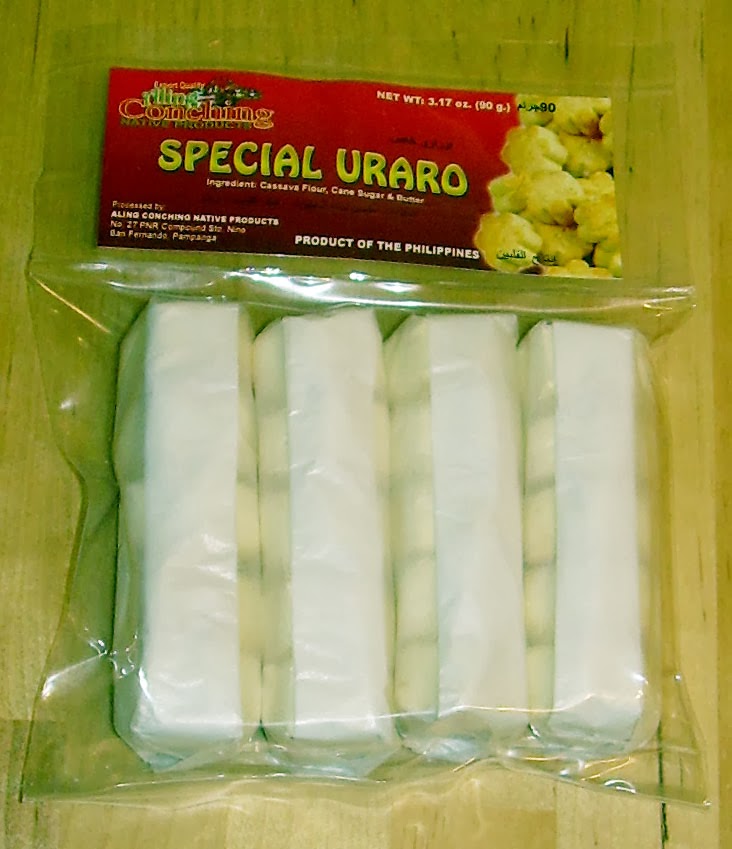 As some of my readers with detailed memories may recall (that is to say, probably no one), I don't make New Year's resolutions. That being said, I did have a recommendation for my Facebook friends for the coming year. It's not something I personally can resolve to do because I already do it. That recommendation is to try and do something new every week. In fact, I said it would be a good idea to make a numbered list from 1-52 and write down the new thing that you had done to motivate yourself to keep doing it.

One of the reasons why I've started to review non-Japanese food every Friday is to try new things. I haven't tried every Japanese thing on the planet, but I have tried a lot of them. Since I'm fortunate enough to have access to a plethora of Asian markets (and ethnic markets in general), I'm blessed with new snack food potential at every turn. It was in the spirit of trying something completely new that I picked up these "special uraro" cookies. I had not idea what they were. I only knew that they were cheap (about a dollar/105 yen) and from the Philippines.

It wasn't until I got home and looked them up that I learned that they are arrowroot (cassava) cookies. That would mean more to me if I knew what arrowroot was. Looking it up on Wikipedia told me a lot about the history of it and informed me about its potential for gluten-free diets, but it didn't really give me any idea of what to expect from these tiny little cookies. Each is a little bigger than the diameter of my thumbnail. 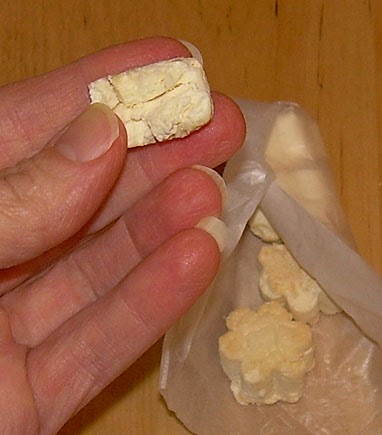 Each cookie is very dense and crumbly. They smell vaguely of coconut, though that is just my nose trying to find a similar aroma to that of arrowroot/cassava. The ingredients list for these is very short. It's just cassava flour, cane sugar, and butter. Clearly, there is no coconut in there.

The cookies are stored in 4 wax sleeves, but given how dry and crumbly they are, they keep pretty well despite having a fairly "airy" packaging. I've had these around for awhile and did not have them sealed up after opening and they stayed pretty much in their original state of crispness.

These are an unusual experience. The flavor is reminiscent of coconut and they don't come across as very sweet at the start, but get sweeter on the second bite (and each cookie is at most two bites). They also have a very chalky flavor which matches the texture to some extent. The texture is a cross between a shortbread cookie and a Tums antacid tablet. Each cookie is 23 calories.

These are not especially bad, but they really weren't particularly good. I think that they are designed largely to be shelf-stable and to cater to rather basic tastes. I believe there are probably lots of far better cassava cookies out there and I plan to look around for a more expensive variety in the future as a point of comparison. As a starting point for "uraro" cookies, I'm glad I picked them up, but I really can't see finishing even the small portion that I purchased this time.

Arrowroot biscuits are pretty famous in Canada as being safe for babies. When you mentioned Arrowroot I thought of baby cookies!

Do babies/children in the US get Arrowroot cookies or is it just a Canadian thing?

Of course, these aren't quite the same thing, but to me they sounded like something out of my childhood...almost!

I LOVE your blog. Btw, I was trying to comment on this blog for the longest time but it wouldn't work. I then realized it was because I was following you on bloglovin. I can't comment on your blog if I open up your blog via bloglovin. D: So it was only possible if I actually typed up your url.

Helen: I think that it's just Canadian as I've never seen arrowroot biscuits here. That being said, I don't have children so I never really carefully looked. ;-)

Andea: I'm guessing that has something to do with Blogger's restrictions. I'm glad you found a way to comment!

i'm from the Philippines, and i just looked at "uraro" cookies as "grandma's cheap presents". lol! never thought it is safe for babies.. i'm excited to buy more of those when i visit the Philippines.=) brings back childhood memories. haha