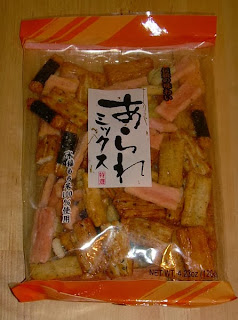 When I was growing up, my mother was the queen of buying off-brand and store-brand snacks. I'm pretty sure that we never once procured a bag of Ruffles or a Lays brand product. I'm certain we never purchased anything from Hostess. For us, "Little Debbie" was the highest rung, on the rare occasions when we got that far up the economic snack ladder. I think that we dwelt more in the zone of "Mrs. Freshley's" - that's the "Dollar Tree" brand for those of you who don't find yourselves mucking about at the lower end of the shopping spectrum.

I imagine Japan has its equivalent of "Mrs. Freshleys" (or in the case of salted snacks, Granny Goose), but we foreign folk don't know the difference between their Lays brand (it's probably Calbees) and their cheap brands as we didn't grow up with advertising and pricing fluctuations. Even after having been in Japan for 23 years, I still just grabbed whatever suited my fancy and ignored the price differences. Of course, the price differences weren't nearly as broad there between the high and low snacking ends.

I mention the branding issue because I believe today's snack is the equivalent of the lowest of the low on the sembei front. I paid only a dollar for this at Marukai market and it's the sort of thing that I tended to completely ignore in Japan. The main reason it didn't appeal to me was that there is no specific flavor mentioned. It's just a generic mix of different flavored rice crackers. The only identifying information is the use of the word "arare". That simply lets you know that they will be hard and crunch little bites instead of puffy and airy things.

My expectations of these were suitably low. They got even lower when I gave the back of the bag a closer look and saw that they were made in China. I don't necessarily think that makes them bad, but it does mean that they are made with only the cheapest ingredients and for the least fussy of Japanese consumers - think drunken old men living on limited pensions who will take the cheapest nosh as long as it's salty and crispy.

I should have expected one thing and that was that the pink crackers would be shrimp-flavored. I'm not a fan of shrimp, so this wasn't the best of news. The seaweed-wrapped ones were incredibly fishy and the ones with little dark specs were mainly soy-sauce flavored, though it was rather mild. The light ones were pretty "plain", but most of them were contaminated to some extent by a fishy flavor. This is one of the risks of any sort of mix. In fact, when my husband bought a mint candy at See's they suggested he bag it separately so that it didn't infect every other chocolate. The shrimp and fish insinuated their way into everything in the bag.

Even though I'm not mad about fish and shrimp flavors, I would have found this far more likeable if it weren't for two things. One, they weren't salty enough. All of them could have used a heavier shellacking of soy sauce or salt. Two, they were slightly stale or their texture wasn't as crisp as it might have been. I can forgive and tolerate the flavors infecting one another, but I can't excuse the poor texture. That meant I couldn't finish the bag, much as I hate to waste any food.