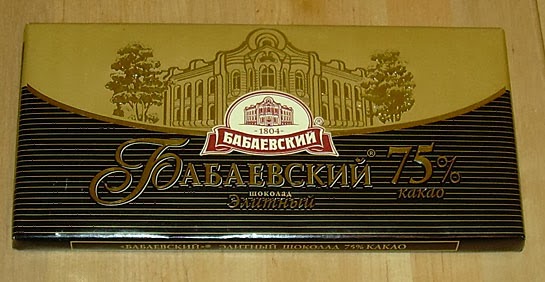 This chocolate bar comes to me courtesy of a Russian friend who went home over the holidays and ever so kindly brought me back some awesome souvenirs. In addition to this very large (200 gram) chocolate bar, she also brought me back tea and a Gzhel pottery rocking horse. I couldn't be more delighted, so my review may be tainted... but, probably not. The truth is that I love European candy. It is usually stuff from Western Europe, but Eastern Europe is good, too. I have great friends. I really do.

It's always a bit of a trick for me to track down information on food I get from countries other than Japan, but the company that makes this, Babaevsky, has been around since 1804. I've read that Russians regard this as a very nostalgic treat. I'm guessing it is their equivalent of Hershey's, only, you know, without the low quality that now comes along with America's best known "chocolate" bar. Babaevsky chocolate has, apparently, won many international candy contests.

With all of that positive press to live up to, I had reasonably high expectations of this bar. Since I'm not an enormous fan of dark chocolate, it's sometimes hard to please me on this front. I'm okay with it being bitter, but not too bitter, and I hate it when the bitterness is compensated for by being too sweet. Trader Joe's dark chocolate bar has been one of the few that has kept me happy, though I rarely partake of it much these days. 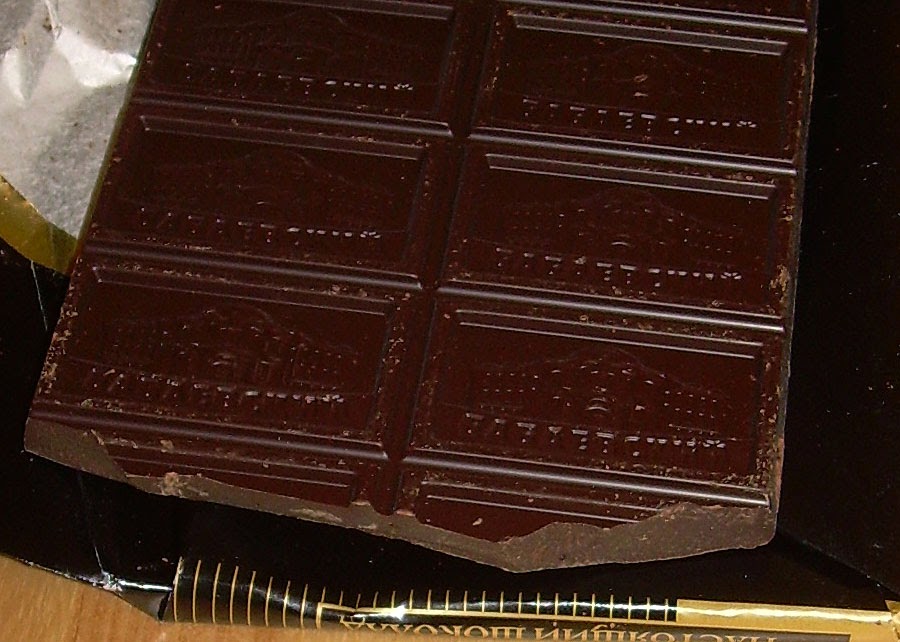 Because this is dark chocolate, the bar doesn't have much of a sheen on it and the finish is quite dry. The ingredients list is "cocoa mass, sugar, cocoa powder, cocoa butter", emulsifiers, and artificial vanilla flavor. I didn't know what "cocoa mass" was before, but apparently it is the "brown stuff" in cocoa. The white stuff is cocoa butter - that is what makes white chocolate. I'm guessing cocoa mass is used to up the level of cocoa to 75%, and using more of it is the reason this is so dry. However, I'm engaging in idle chocolate speculation here. I really don't know.

What I do know is this bar is not too sweet and not too bitter. It has a fruity aroma which registers when you eat the bar as cherry notes. It's complex enough to be an interesting nosh, but intense enough to satisfy with one square (each block is about 60 calories depending on how you manage to break it off). As dark chocolates go, I really liked this one because it didn't leave the same sort of unpleasant aftertaste that Japanese bars do and it wasn't too strong on the coffee notes. It also didn't have the sense that one was coming very close to eating baking chocolate and actually eating candy - adult, sophisticated candy, but something decadent nonetheless.

I really like this and would welcome a steady supply. I'd rate it as equally good to the dark chocolate at Trade Joe's, but with much nicer complexity and flavor depth. Amazon sells some Babaevsky dark chocolate, though not this particular bar. If you can try it though, I'd say it is well worth your hard-earned cash, especially if you like dark chocolate, and I'm not just saying that because the origin of this gift was a special one for me.

hmm, you don't usually think of chocolate coming from the Soviet Union as being anything worth talking about...but then I've only had some of the chocolate candies and they weren't very good. I think I'll stick to Belgian :)

You can't go wrong with Belgian chocolate, but I have to say that I loved the fruit/cherry notes in this chocolate.

One thing that I'm endeavoring to do is to get a good grounding in the subtle flavor profile differences in each countries various snack foods. I think that it tells you something about the tastes of people living in that culture because such products are marketed to suit them.

I don't know if Russia has any reputation among confections, but I do know that I've had some pretty good experiences with Russian snacks/food! Perhaps I've been lucky, or there's some undeserved bad reputation from the Soviet years when things were scarce. ;-)