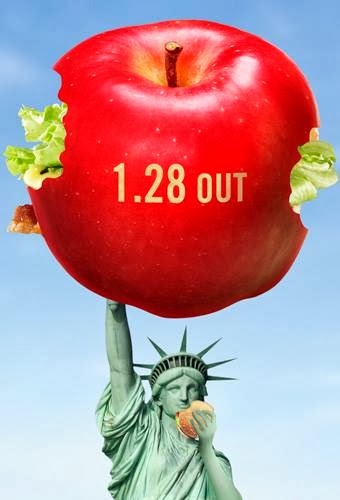 Burger King Japan has released this rather cryptic ad with accompany text that says, "coming soon". One can only guess at the monstrosity that may be related to it. The statue is eating a burger and the apple appears to be stuffed with lettuce and bacon. It could be that they're going to have a burger which contains apples or uses apples instead of bread for a bun. However, chances are that this is a far more boring item and that the apple refers to "The Big Apple" (as does the Stature of Liberty) and that we're going to be seeing something called a "New York" burger released on January 28.

Any guesses from my readers as to what would make for a New York burger or what this ad might mean?
Posted by Orchid64 at 8:00 AM

It's basically a whopper / burger with a couple slices of flame broiled Fuji apple.

And the first 50 people who order at the locations listed at the bottom of the article get a free apple to boot!

Are you going to try it?