If someone decided to create the written equivalent of esparanto, that is, a writing system that everyone could use as a common form of  communication, but was no ones native language, would you want to learn it? Would you be willing to memorize the characters and learn to type and write them? If it were possible, what are the chances that we could get all the peoples of the world to make the effort? I can't speak for everyone, but I'm pretty sure that a lot of the English speakers wouldn't trouble themselves since they currently possess the dominant language for international exchanges. Why should they bother?

I think about things like this when I look at a package like the one this candy bar came in and think about the fact that I can't read anything on it. Unlike the Japanese, the Koreans don't alway splash a bit of English here and there to give us a clue of what is going on. And, unlike Japanese, I can't understand a single Korean character, but my brain tries to shape them into Chinese ones in an effort to try. This does not work at all, and only increases the depth of the furrowed wrinkle between my eyebrows that becomes more pronounced with each passing year.

I picked this up at a Korean market for a mere 79 cents because the concept reminded me of a Japanese candy I've had and reviewed before called "Black Thunder." This is a kid's candy which is fairly cheap and had a surge of popularity around the time that I was leaving in March 2012 because the maker, Yuraku, hitched its wagon to the Japanese men's gymnastics team and I believe a particular athlete (whose name I do not know) said it was his favorite candy. He may have been a baseball player. He may have played soccer. I don't know. I only know that he wasn't a sumo wrestler and I'm pretty sure that getting your candy endorsed by one of them wouldn't necessarily be perceived as good for the brand as no one would want to think candy has the chance of making you gain weight. 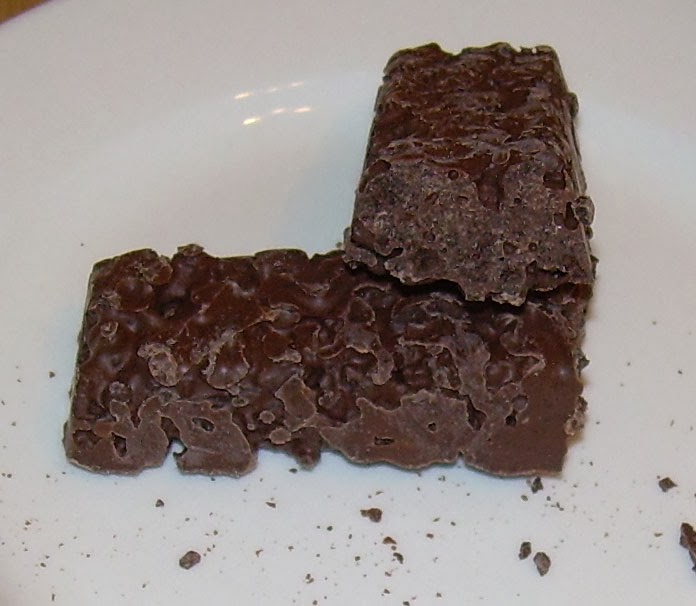 At any rate, if you compare the pictures from my review of Black Thunder to this bar's pictures, you'll see that they are quite different inside. Black Thunder has much bigger chunks of cookie and some cereal. This is smaller, denser bits of cookie bound by chocolate.

The chocolate candy portion is not especially sweet and mainly seems to serve as a somewhat dryly finished bonding material for the cookie bits. This is not a bad thing as the cookies carry a lot of the nice somewhat bitter chocolate flavor of the sandwich cookie that an Oreo has. The textural contrast is also pretty good with some solid, but not brittle, crunch from the cookies and some yielding, but firm sense from the chocolate. Even though there is no "cream" portion, there seems to be somewhat of a similar flavor in the bar which carries the same sweetness.

I think this bar is better than the Japanese one because the chocolate is less waxy and the chocolate flavor more pronounced. Both have great textural qualities, but the cocoa seems to be a bit higher quality in the Haitai cookie bar. For 170 calories for a relatively lightweight bar though, this packs more of a calorie cost. It'd be a toss up which I'd go for. This wins for taste, but Black Thunder is lighter and wins for the calorie to enjoyment ratio. Either is a good deal and I'd recommend picking one up if you can - especially if you're a fan of the cookie part of an Oreo.

Korean actually doesn't have characters in the way that chinese does; it's an alphabet and is actually super simple to learn (pronunciation-wise, that is)--two hours and I had a pretty good grasp. It's helpful, though, because they'll translate English words phonetically, which is interesting in that you'll read a word, get to the third syllable and realize you're reading an English word broken down into Korean^^

I have heard that Korean is phonetic and easy to learn from a reading point of view and thought, "I should do that." The main problem is that, once I can read the words, I have to also understand them and that's a whole other project. ;-)