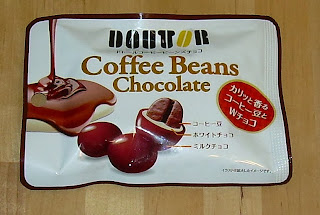 For those who haven't spent enough time in Japan to know, Doutor is a very popular and well-known coffe shop chain in Japan. They are, in my estimation, the Japanese equivalent of Starbucks with, of course, a unique Japanese twist. That spin generally comes in the form of rather more refined desserts and sandwiches which are better made, but smaller, than those that you find in the U.S.

A wedding between Doutor and chocolate sounded a lot like a match made in heaven, so I couldn't pass up a chance to give these a try. Note that I have tried no small number of chocolate-covered coffee beans in my life, but never any produced by a Japanese company. The ones that I have tried have always been imported. The main features of this particular confection has always been that the beans are either so potent that they overwhelm the chocolate or the chocolate is so thick that it overwhelms the bean. It's a delicate balance, and I've had some good ones, though not lately and certainly not often.

The spin on these particular chocolate-covered beans comes from the fact that the interior is white chocolate and the outer coating is milk. I've never seen a two-toned version of this, and the idea, I'm guessing, is to bring to mind coffee with cream as well as a hint of cocoa. It's an interesting idea, which doesn't really pan out well with the candy itself. 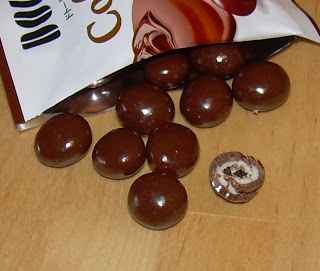 On the bright side, the beans that are used are on the smallish side. Since roasted beans are pretty potent, that means that they don't necessarily dominate the scant amount of coating. The white chocolate inner coating doesn't add any milkiness or creaminess, but it does add sweetness and a rich textural contrast to the crunchy bean. The outer shell is really what lets you down, however. It simply doesn't have much in the way of chocolate flavor. It's very shiny, which probably means it is waxed, and that does all the more to mask any of the actual chocolate notes.

It's important to note that I tried this two ways. First, I tried it with no beverage and I could really taste the coffee element. Second, I tried it with a cup of coffee and then I could pick up much more on the sweetness of the white chocolate and the chocolate coating. If your taste buds are acclimated to real coffee, the flavor of the bean tends to recede a lot into the background. I didn't find this to be a bad thing given how it added a different dimension to the experience.

If you want a taste of something with coffee, but are not in the right place to get one, keeping a bag of these in your desk for a nibble (each bean is about 10 calories) is not the worst you can do, but it is certainly not the best. Frankly, this is just a very bland chocolate-covered coffee bean experience and I'd look elsewhere.