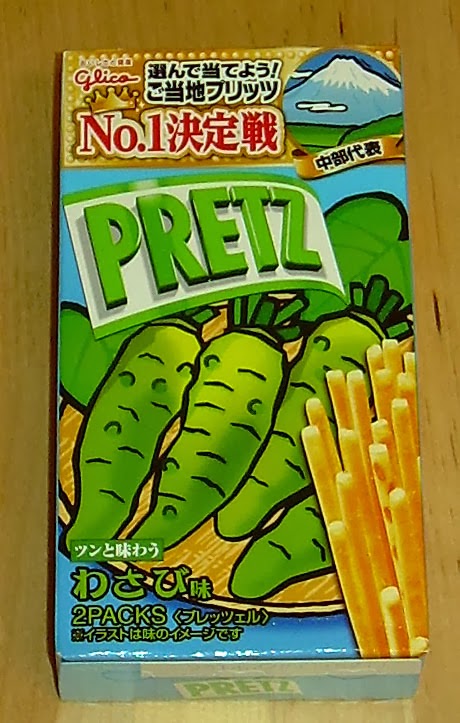 I would think that Glico ripped off Nestle's concept of issuing regional varieties of various foods if it weren't for the fact that I know the notion of regional specialty snacks almost certainly pre-dates Nestle's existence as a company. In fact, I wouldn't be surprised if it goes back hundreds of years in Japan (if not further). At any rate, the marketing concept seems certainly to be a similar one, and I believe it works much better for pretzels than for chocolate. You can make a pretzel savory or sweet without going through the looking glass. You can't really do that with chocolate, though Nestle Japan sure did try.

I rarely know off the top of my head why a certain flavor is paired with a certain region. For instance, I still don't know why rum raisin KitKats were paired with Tokyo as it is not famous for it's rum or grapes/raisins. It turns out that Nagano, which is in Chubu, is famous for wasabi so that is where this notion comes from. Prior to this, I just thought of Nagano as the place where everyone does snow sports. At any rate, wasabi is grown in various places including Tohoku so it is a very flexible choice for a regional Pretz.

I've tried wasabi Pretz before, but they were not a regional variety. As is so often the case, I believe that there is little or no difference between regional versions and regular versions of the same flavor. I knew when I bought these that they may be the same thing that I tried before in different packaging. As it turns out, I'm largely right, though there is a superficial difference which makes it questionable that these are, indeed, the same pretzel sticks. 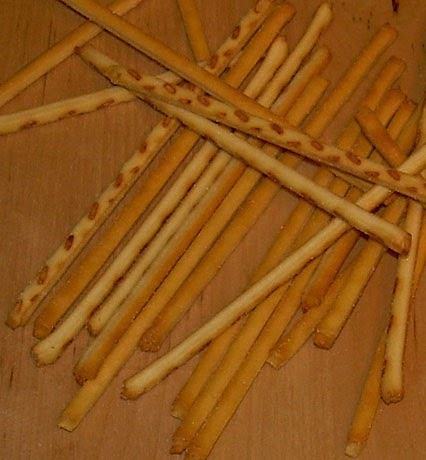 In terms of the tasting experience, these are the same as far as my tongue can recall. They have the grassy flavor of wasabi and give a bit of a burn on the back of the tongue as a secondary flavor. By about the fifth stick, you're getting that familiar discomfort at the back of your nasal passages. Continuing onward from that point only makes the effect stronger. The sticks are fresh and crispy, but don't have the effect of shattering that you get from brittle bready pretzels. I wouldn't be surprised if these include more delicate layers of fat between the flour. These are tasty, savory, and just salty enough without being too much of anything.

The only difference that I can tell between these wasabi Pretz and the ones I tried before is that the others were tinted green and these were not. I don't know if that means some coloring was added before or if coloring was somehow removed this time. I can only say that it has no impact on anything other than aesthetics.

These are very fine flavored pretzel sticks and I can honestly say I'd buy them again since I believe I have already bought them twice now.