Burking King BiKing is back 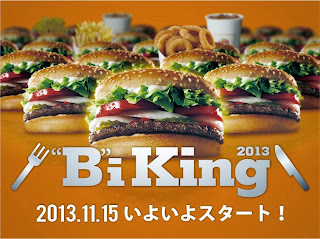 Burger King conducts an annual campaign which can be very confusing to those who aren't familiar with the ins and outs of Japanese spelling and pronunciation of various letters as well as their unique term for "all you can eat." When an English speaker reads only the English on this ad, it may appear that they're dealing with people who ride bikes or that the king has decided that his door swings both ways.

The reason this is written as "BiKing" is that "Viking" in Japan means "all you can eat" and the sound of "b" and "v" is a problem for most Japanese listeners when it comes to English. From 2:00-11:00 PM, customers can buy a set and for 30 minutes, they can have any component of it (onion rings or fries, drink, burger) refilled. If you're caught trying to take out leftovers (absolutely no take-out on this deal) or sharing with others, you will have to put on a creepy King mask and stand outside the shop with a sandwich board admitting your crime. Okay, that's a big, fat lie. We all know that most Japanese would rather die than die of embarrassment admitting that they tried to weasel free grub out of the King. If you cheat on the deal, you have to pay for each component separately.

This is an interesting campaign (which started on November 15) because it allows people to have all you can eat on potentially high value items like a burger. However, given the 30-minute time limit and the fact that most Japanese people are not capable of hogging down a ton of food at once - barring the competitive eaters out there - this is probably a money maker for Burger King rather than a loser.
Posted by Orchid64 at 8:00 AM