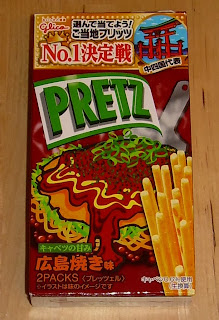 Recently, I went a little crazy buying vegetables. Yes, I'm one of those freaks of nature who actually enjoys them and going overboard set me up for days and days of eating eggplant, spinach, brussel sprouts, lettuce, and tomatoes (not all in one horrible salad) before they went bad. The truth is that there are few vegetables that I don't enjoy in one form or another... except peas.

Why has the pea been placed into veggie exile in my mind? It's not because of the taste necessarily. I'm not a fan of the texture, but I'm mainly thinking of canned peas and not fresh ones. I hate peas because my mother tried to force me to eat them when I was a child. When I think of them, I think of being forced to sit at the kitchen table with a plate of them in front of me. I played a power game with my mother on that day and I won. She and the peas both lost.

So, a lot of our food preferences are about taste, but some are about experience. I should probably give peas another chance, but then they (and my mother if she found out) would "win" and I'm not going to surrender my victory no matter how much time has passed. Okonomiyaki, the Japanese "pizza", "pancake", "omelet" or pile-of-stuff-that-looks-like-barf -(whatever you want to call it ) has a similar negative memory associated with it. If you don't want to read the linked post for the story, I'll say that I hate the connection between idiot school girls and okonomiyaki more than I dislike the taste of the actual dish.

Fortunately, I don't connect Pretze with school girls of any kind so I was willing to try out this "Hiroshima-yaki" with a picture of okonomiyaki on the front variety. Apparently, the Hiroshima-style okonomiyaki has a layer of yaki-soba noodles as well as bean sprouts, omelets, eggs, onions, and other typical ingredients. Incidentally, this is a "regional" Pretz. Yes, there are those just like there are regional KitKats. 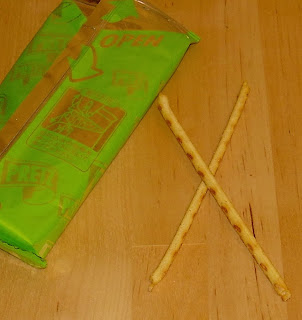 I suspected when I bought this that it wasn't going to possess a rich flavor depth that included all of the involved ingredients. Pretz is, after all, a pretzel dusted with flavored salt. I don't think they carefully integrate seasoning into the dough before they bake the pretzels, but rather just use different flavoring on their basic pretzel. And, I was right. This has a light dusting of seasoning that gives it a mild okonomi sauce (that's the brown goo that is on top of the pancakes) flavor and not a whole lot else. It's got a little hint of Worchestershire sauce and soy and not nearly enough salt. The pretzel itself has a nice quality which is fresh and light, but nothing really to get too excited about.

If you are scared of something exotic, but want to fool yourself into thinking you're being adventurous with food, this is a great choice. It's a bit expensive for a fairly basic pretzel (I paid about $1.50 for this) and only worth it for the novelty factor. While I thought this was fine, I certainly wouldn't buy it again because it's just not that remarkable.

Sorry to hear about your bad okonomiyaki experience, but you really shouldn't mistake those splodges in the picture in the post you linked to, with Hiroshima style Okonomiyaki!

That said, I can't imagine the Pretz tasting great - maybe a Worchester Saucey type flavor? Haven't seen them here in Hiroshima yet, but will now have to try them if I do!

Oh, I bought those when I was in Japan a month ago. Gave them away thouh.. (since I'm celiac)