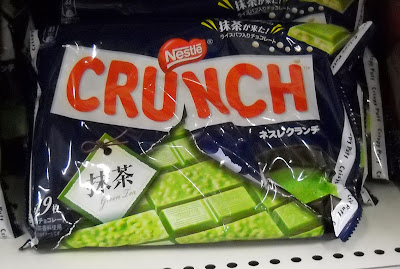 Nestle Japan is mainly recognized for its KitKats, but it has been introducing the Crunch bar to the Japanese market. They didn't sell them as individual bars when I was there, but they sold them as mini bars in large bags. For this reason, I never bought a Nestle crunch bar in Japan as I didn't want to buy an enormous bag of them.

One of the reasons the Crunch brand isn't as well known as KitKats is that Nestle Japan didn't go crazy offering a lot of varieties, though they did offer a green tea variety (which I can still buy here but according to the Nestle Japan web site, it's now "obsolete") and are currently offering a vanilla caramel version.

I used to love Nestle's Crunch bar when I was a kid and it was my second favorite candy bar to see in my trick-or-treat bag (the first was Snickers). Since coming home, I've found that the quality has changed or my tastes have. It's not the thrill it once was.
Posted by Orchid64 at 8:00 AM

I think the quality of most US chocolates has been on a steep decline for a while. I used to be a huge fan of the Hershey-equivalent, Krackel. Now that Hershey's does not use cocoa butter in the majority of their chocolate bars, they taste "waxy" and the melt is totally different. Unfortunately this hasn't done much to limit my candy consumption, as now I just look for other, better, usually more expensive alternatives ;)

I have been reading (and experiencing) what you're talking about. The chocolate is definitely declining in quality, but I think my experiences pre-Japan were too out of date to do a comparison. Japanese chocolate is rather different (more bittersweet with an almost coffee-like quality) so my recollection of better days in the chocolate world in the U.S. are rather outdated. ;-)