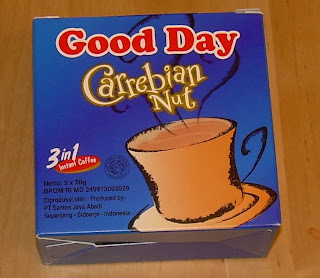 Recently, I acquired some samples of General Foods International Coffee including the Suisse Mocha variety (one does this by asking for them - it's no great feat). About 20 years ago, I was an enormous fan of the sugar-free Suisse Mocha. It seems that a sugarless version is no longer being produced, but I did want to try the regular version to see if it held up over the years. It did not.

The flavor of that instant coffee seemed thin and despite my carefully measuring the water, it seemed very diluted. My guess is that the coffee didn't really change, but I did I've since spent years drinking real coffee. It's not like I'm guzzling down espresso or black coffee, but rather I tend to mix half a cup of good, strong-ish coffee with a half a cup of almond milk. Still, my diluted coffee is stronger than Suisse Mocha. It disappointed, but it's not like I was thinking about going back to drinking it regularly anyway. Still, I like to have a solid instant coffee option (as well as a hot cocoa one) because sometimes I'm either too tired to make the real thing and I'm not too infrequently in a place where that is not an option.

After the Suisee Mocha disappointment (which would be a good name for a suspense movie), I was very much looking forward to trying this instant coffee which I received from KS Snacks in Indonesia. As some may recall from the "service" review I wrote of them, they sent me a big box of intriguing goodies and this was one of them. There are four flavors of "Good Day" instant coffee and, luckily, this would have been the one I was most curious to try given that I'm a huge fan of hazelnut.

Preparing the coffee is simple. Add 150 ml. of hot water and stir. It's pretty simple stuff. I usually add a touch of milk to instant coffee on those rare occasions when I have it, but I wanted to try this straight up the first time. It didn't need the added milk. 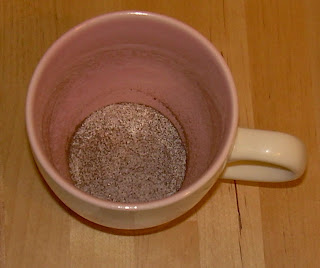 The ingredients list is quite short and simple. It's instant coffee, sugar, non-dairy creamer, and hazelnut flavor. That should give you some idea of the sweetness level of this. It is intensely sweet, but not in a bad way. In fact, my first sip made me think of "liquid Nutella". Though there is no chocolate in it, the roasted flavor of coffee can sometimes take on chocolate flavors and the pairing with hazelnut as well as the high level of sweetness brought that yummy treat to mind. 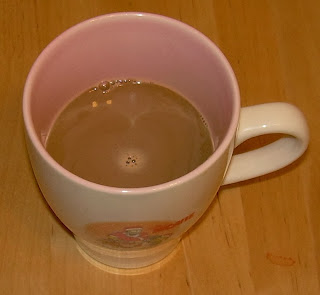 I don't want to be misleading. This isn't really liquid Nutella. It just brought the notion to mind. There is an intense hazelnut flavoring at the end of a sip which hits you with a strong dose of flavor. If you've ever bought or tried brewed hazelnut coffee, this is it with a milder coffee flavor, more milkiness and more hazelnut.

I liked this a lot, but it is like liquid candy. It's very sweet and intense and more of a substitute for a treat than a beverage. Still, if you like hazelnut a lot, quite sweet drinks, and coffee at least a bit, you should enjoy this. You can get it here for 14,900 rupiah or $1.28 for five packets.  I wouldn't drink this everyday, but I would drink it as a dessert.

Starbuck's VIA is my go to instant. They do have some flavored varieties as well.

I've tried VIA (got a free sample when it first came out), and it was fine, but it is so incredibly expensive for instant.