I subscribe to a web site which shows retro ads for various products as well as one that takes old recipes and tries them out to see if they're decent. In both of these cases, you see a fair number of ads for things which are incorporated into recipes that don't really belong. Old 7-Up ads, for instance, encourage you to pour it in your meatloaf mix or to mix it with milk and give it to your kids.

It makes perfect sense for manufacturers to try and shoehorn their product into your recipes so that you'll use it more often. Lawson has taken a very different approach to trying to sell its bread. Rather than encourage you to buy bread and then incorporate it into your French toast, tsukune mix, or soak it in sake for a Japanized bread pudding, they just give you recipes for food that goes well with bread. 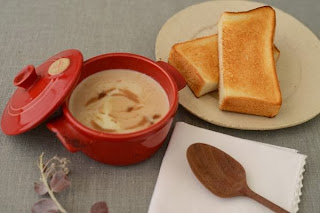 The idea of pairing your food in ads in order to put the idea in people's heads that, hey, 'food A goes well with food B', but I don't think I've ever seen recipes given which don't include the product being promoted. It's an interesting concept and the reason this caught my eye was a recipe for chestnut soup. In fact, at first I thought they were selling the soup in their convenience stores, but, no, it's about the side dish.

If you'd like to make the soup, the recipe is here. It's actually not too dissimilar from a recipe I created while living in Japan though I didn't use cream in mine and I included carrots, sage, and thyme. There are 7 recipes and only two of them show bread as a side. The others are actually for spreads to put on bread, sandwich filling, and, in one case, making a French-toast-style recipe with berries. The basic concept is to pair bread with a variety of other flavors (lemon, egg, chestnut, potato, apple, salmon, and berry) so you can enjoy Lawson's brick of white bread every single day of the week with a far more interesting flavor.