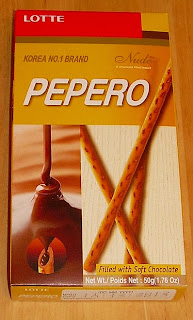 I didn't know this when I bought this snack, but apparently November 11 is "Pepero day" in Korea. According to Wikipedia, the original purpose of this day -an opportunisty holiday created by Lotte in order to sell more of their snacks - was for people to become taller and thinner. The irony of exchanging sweets to become thinner was apparently lost on the marketing folks at Lotte. The date was supposed to relate to this tall and thin image as well as the product's appearance ("1111" for November 11 - I bet that loved 11/11/11 when it rolled around).

These days, the holiday is supposed to be similar to Valentine's Day, or at least the Japanese version of it. That is, it's about showing affection for friends and family. There's an interesting article in the Wall Street Journal blog about this holiday and how Glico created a "Pocky day" to counter this rival's invented holiday. Again, there is irony to this as Pepero is a rip-off of Pocky and then Pocky ripped off the Pepero holiday. They're just a couple of happy thieves stealing each others ideas.

Pepero nude is called such because the normal version has the chocolate on the outside like a Pocky. Since I hadn't really seen Pepero much before I picked this box up for 89 cents (about 90 yen) at Ranch 99 Asian Market, I had to learn about the fact that this is not their usual version from my research rather than experience - such is the studious life of a snack blogger. 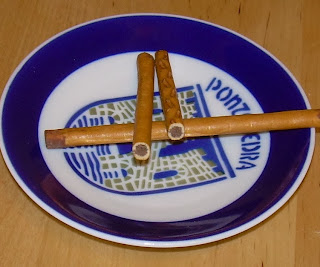 These remind me in terms of their concept of Koala's March or Pucca. They're essentially an inverted Pocky stick. The good point of this is that you can use a softer filling because the chocolate coating isn't on the outside where it can rub off. The bad part is that that chocolate flavor is not going to reveal itself quite so fully.

The latter is part of the problem with these snack sticks. There's a very nice pretzel shell on the outside which has a pleasing earthy flavor from whole grain flour. The chocolate flavor is very muted even when you get to the center. Part of the reason for this is the overall construction. The other is that it's neither sweet nor salty enough to enhance the cocoa flavor. If there was a little more sweetness on the inside and some grains of salt on the outside, this could be a powerhouse. As it is, there's a touch of bittersweet chocolate flavor, a tiny bit of fatty richness from the soft filling, and a whole lot of pretzel.

Anyone who has read my blog regularly knows that I am not a fan of sugar bombs and this doesn't have to be insanely sweet to satisfy me. I know that tastes vary from country to country so I'm guessing that Koreans like their sweets low on the sweetness - even lower than the Japanese. Since this claims to be "Korea's No. 1 Brand", I'm guessing it is well-suited to their palates. It's just not finely tuned to mine. At 15 calories per stick, it's a pleasing option for the hips, but it's not doing nearly as much for the taste buds as I'd like. I'll slowly finish this package (17 sticks were in mine), but I wouldn't buy the "nude" version again.