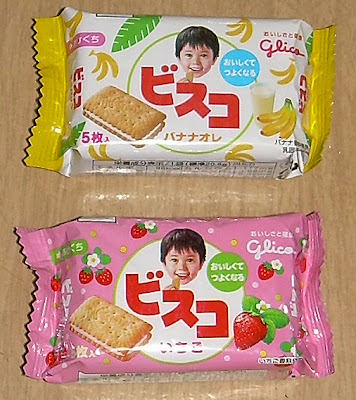 Bisco is one of those things I've seen for decades but never expected to sample. This is because the front of the package depicts a baby and I assume these are biscuits for teething children. My view on this matter did not change, but was rather changed for me when I bought a small package of Collon for review. I didn't heed the signs very well and when I got to the check-out counter, I was told that I needed to buy three of the small packaged snacks for 100 yen ($1.24) so I rushed over to the rack and grabbed two of the first things in the general vicinity of the Collon. They were these two packages of baby biscuits. 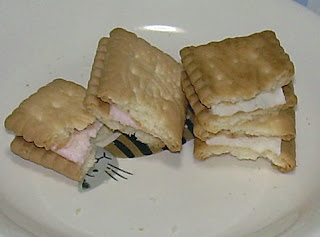 So, now that I've spent all of 66 yen on these, I'm going to review them no matter how silly I feel eating food marketed for little kids. Based on the image on the package, these are pretty darn close to being teething biscuits... not that I'm embarrassed or anything to be gnawing on something designed for people who have no teeth. I probably will, one day, also have no teeth, though with no hope of new ones coming in.

Each little cookie is about half the size of an Oreo with a smidge of cream filling inside. The machines that make these aren't particularly careful about how they assemble them. The bottom of the cookie is sometimes the top (as you can see by the one on the right above). Each smells a bit of the fruit it is supposed to be. Both are comprised of the same fairly bland, cracker-like cookies sandwiching a modestly sweet filling with good, but not overpowering banana and strawberry flavors.

I liked these, to be perfectly honest. They're certainly not an Oreo or Nutter Butter or super sweet sandwich cookie, but I really liked the flavor of the outer biscuit. It has a real sense of being an old-fashioned baked cookie which wasn't formulated to get people addicted to eating tons of them. They're made with wheat germ which brings in a somewhat earthier flavor than usual for a cookie. Each packet has only five cookies (approximately 20 calories each, about half the total size of an Oreo) stacked on top of each other. They pair well with tea.

Would I buy these again? Absolutely. I might not buy them a lot, but if I was at work and wanted a little packet of cookies to have as a snack, these would suit me better than some sugary alternatives. That being said, I'm not sure they're going to be that appealing to people who aren't very keen on whole grains and less sweet biscuits.

My little boy loves these and I don't mind a few when he is having his :)

Hi. First ,I hope you can survive Tokyo summer heat wave.
Here northern part is also sweltering, so I can imagine how hard your Tokyo 節電life.

There are a lot of adult fans of bisco around me.(^^)
How about trying other flavors next time?
There is also whole wheat version with vanilla filling. More flavorful . You will like it