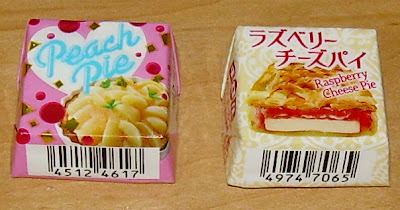 When I was growing up, I remember going to local supermarkets with  my mother and seeing these boxes of pies with a clear plastic cover over the top. They'd have elaborate crusts with patterns on the top, perfectly crimped edges, and look nothing like the slapdash pies my mother put together. Hers had crumbling edges that were pressed down with a fork. I remember wanting to buy and try those pies, but we were too poor to pay whatever they cost. If I was having pie, it'd be her craptacular crust with some store brand canned pie filling plopped in the middle.

You can imagine that my pie experiences back home were far from stellar. In fact, because I was never really exposed to good pie (not that the supermarket pie would have been good, but there may have been a chance), I didn't really miss it when I came to Japan. Japan is a country that, by and large, doesn't "do" pie. There are some shops carrying something resembling pie, but a lot of the time it's not wedges cut from something round but rather flaky dough with fruit or custard heaped on it and given a shellacking with sugary glaze. So, I'm definitely not approaching these with the enthusiasm of a true pie aficionado. I'm guessing that is all for the best.

I picked these up at a local 7-11 for 32 yen (42 cents) each. This is the standard price at convenience stores for premium Tirol chocolates in my area. However, the availability of any particular flavor is not certain and I've been to 7-11 and other convenience stores that didn't have one, the other, or both. You may have to scout for them. The raspberry cheese pie one is 58 calories and the peach pie is 53, quite reasonable calorie "costs" for candy which is about 1 inch/2.54 cm square. Think of it as having a similar volume to 2.5 Hershey's kisses. 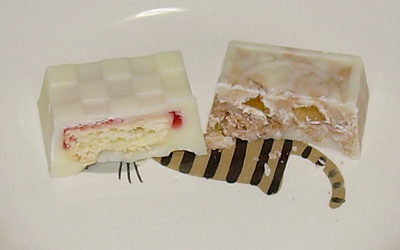 Raspberry Cheese Pie was a flavor I approached with some trepidation as my experience with Tirol cheese chocolates has not been a happy one. As I've said before, with cheese sweets in Japan, you have to think "Gouda", not "cream cheese". The mix of pungency with sugar can be quite off-putting, if not an obnoxious assault on the tongue, but hope springs eternal. Peeling off the wrapper and giving it a sniff, I was thinking "oh no", not "yummy". It smells like cheddar, which did not really play well with visions of raspberry cheesecake flavors dancing in my head. Fortunately, the cheesy nature was not overbearing and paired very nicely with the ever so slightly floral raspberry flavoring and sweet white chocolate. While I wasn't blown away by this, I did eat the entire thing and enjoy it. I wish, however, that the textural elements had been a bit clearer. The biscuit in mine wasn't crispy, but rather like a soft cookie and I'd have preferred a crunchy contrast to the soft white chocolate.

The Peach Pie was the flavor I had higher expectations of because I loved the Apple Pie premium candy. I was delighted to see that it had the same crispy bits packed into it and happy that it smelled amiably of peaches. Cutting it in half for a picture, I noticed little bits of dried peach in there and they gave this the same chewy fruit and crispy pie bits texture as the Apple Pie candy. This is quite sweet, however, but I "blame" that on the white chocolate. The peach flavor is a bit intense, but I didn't mind.

I would definitely recommend either of these as a small tea time treat when you are in the mood for just a few bites. They are both very tasty and have complex flavors and in the case of the Peach Pie one, varied textures as well. I wouldn't recommend these if you are looking to indulge in more than a bite or two though as the sweetness can get pretty cloying. I ate both of these at the same time and it got to be a bit much for me by the end of the second one, but I think I actually would buy them again if I wanted a sweeter than usual bite of fruity chocolate.

Isn't that true? About the pies? It's like finding a needle in a hay stack! Yai yai yai! as my grandmother would say!

I found a mean apple pie from one of the shops, the crust was spot on, delish, I wonder if they have that chain shop in your area, I'll have to check the name.

I have never tried Tirol before, but I am graving peach cobbler pie.

Oh, I love it when you review Tirols. We're planning a trip to Japan in January, and I intend to bring back plenty of these.