Ta Pasta is one of those things that has been on my mind for quite some time. This is because the concept sounds interesting, but it's also because it has such a shiny silver package. Those of us with short attention spans are lured to such trivial details.

Rather more seriously, the flavors of the Ta Pasta line have always intrigued me, but not quite enough to get me to buy it until I found it on sale for about 130 yen. Usually, I see these for closer to 160 yen.The bag is 40 grams and has 176 calories.

My feeling every time I see these is that they are pretzels with an odd name. IN fact, if you look at them, they have the same marks on them as pretzel sticks. This is a land of things which are named in foreign languages which don't necessarily contain what the name might indicate. I once bought saw a box of condoms named "Passion Mint Jelly". There was no jelly in the box.This was before I realized that Japanese condoms are not exactly suitable for foreign males. 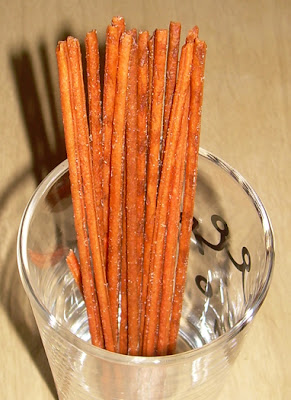 So, thinking these were probably pretzels, I purchased them only to discover that there is truth in advertising. This is pasta which is hard and crispy and seasoned strongly with garlic and less so with chicken and Italian pepper. They're fairly strong in terms of flavor and rather tasty and savory when it comes to their seasoning. However, the basic flavor of pasta as a background to the salty, powdery goodness on the outside isn't one that really lights my fire. If you've ever gnawed on an uncooked bit of pasta, it has a bit of that going for it. It's a carby, starchy flavor without the yeasty, light overtones of a bread-based snack (like a pretzel) or the potato crispiness of a chip based one (or the absolute awesomeness of corn).

These are fine. Really. There's nothing wrong with them but they're just not for me. I'm just not a big fan of that raw pasta flavor which whispers in the background. If you dig that sort of thing, and like garlic, I'd recommend giving this a go.

If you ever have the chance, try the basil and cheese flavor. It's by far the best of the three, although I think the Bolognese and Pepperoncino really grew on me over time. But then, I always liked chewing on a couple pieces of dry spaghetti when I was a kid!