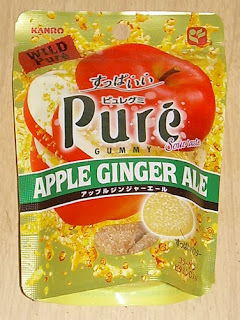 This flavor of gummy is part of Pure's "wild pure" line. The thing that makes them "wild", apparently, is the kooky notion of including two different flavors rather than one. Apparently the people at Kanro (which makes the Pure gummy line) live a very sheltered existence.

I spied this out of the corner of my eye just as I was checking out at a Lawson 100. I didn't get a good look at the package before grabbing it and slapping it down on the counter and I thought it said "Apple Ginger". I missed the "Ale" part and probably wouldn't have opted to buy it had I known. It's not that I dislike ginger ale. In fact, I really like the drink but my experience with it in candy is that it tastes like flat, stale soda rather than a delightful bubbly concoction associated with dryness and our neighbors in the great white north. Still, I'd spent my 100 yen ($1.30) and now I was going to chew it up regardless of my mistake. 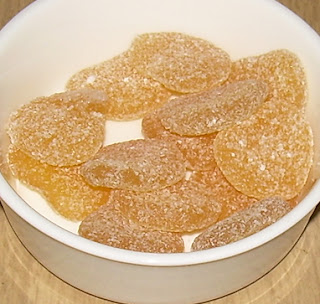 The picture above is the contents of the entire bag (46 grams/1.6 oz.). Each candy has collagen (good for your skin) and Vitamin C (good for what ails you) and provides 12.3 calories. This is a good candy to have around for a flavorful bite or two and, even for a gummy/gummi, doesn't stick too badly to your teeth.

When I opened the bag, it smelled rather intensely of fake apple flavoring. In fact, it reminded me of rotting apples sitting in a hot kitchen, a scent I can identify with after the long and oppressive Tokyo summer. The scent of the actual candy wasn't as strong as the air released when the bag's seal was broken, but it still smells like fermented applesauce. Pure gummy candies are covered in citric acid powder to give them a sour bite and that was present here, though it was masked to a great extent by the relatively strong apple flavor with liberal amounts of ginger. There's also an intense perfumey kick at the end of the bite which is elevated by the tangy powder.

I had mixed feelings about this. I like the texture of the gummy, which is slightly chewy and firmer than European or American gummy candies. I also like the general flavor balance and the citric acid powder on the outside. The fact that these aren't incredibly sugary is a bonus, but ultimately the apple flavor itself was just too overpowering for my tastes. It's a good candy on the whole, but probably not for everyone.

It looks quite good and I'd be willing to give these a try :)

I would love to try this!! Looks good!! I hate how pizza in Beppu are so expensive, only because it's rural area here. :(

I was in Tokyo during the start of this month, I had such a big craving for pizza that I had pizza tabehodai in Roppongi.

I wish I live in Tokyo, so much better than Beppu.