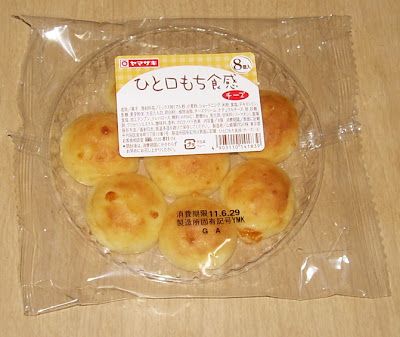 Sorry that there is no cutaway shot. I took one, but lost it in the huge number of photos I've taken lately. If I find it, I'll add it in later.

When we first moved into our neighborhood, there was a Mos Burger fast food joint not 3 minutes from our apartment. Mos Burger, for those who don't know, is the best Japanese rip-off of Western chains like McDonald's. Not only did they pilfer the big "M" logo, but they initially started out with a yellow letter on a red background. As time has gone by, Mos Burger has differentiated itself favorably (for the most part) from Mickey D's. They tailor their menu to suit the Japanese market and offer fresher food. This has the up-side of tasting better, but the down-side of taking a lot longer to serve your order.

When that Mos Burger was still in place, my husband and I used to occasionally go there for food when we were too tired to cook. My favorite was their spicy chili dog. Though I'm not much of a hot dog eater, it was the closest thing to a chili dog I could find in Japan and I grew up with access to very good knock-offs of the famous Skyline chili. As long as a dog had that sort of chili sauce on it, I was in love. I can't say Mos Burger's chili dogs come close at all, but there aren't many other options in Japan.

Before that branch of Mos Burger faded away due to a lack of business, they once offered something called a "cheese pon". This was one of those temporary deals that is on hand for several months then goes the way of the dodo bird. I mention this because those cheese pon were almost the same as this bread which I purchased at Lawson 100 (for 100 yen/$1.24). Eating these brought back memories of spicy chili dogs and greasy bits of chewy bread.

There are 8 little doughy balls in the package and each is a stretchy little dough ball. They are greasy feeling on the tongue, but not so oily on the fingers. The inside looks a lot like mochi (pounded rice cake) and is chewy like mochi, but less refined. The cheese flavor is so subdued as to be nearly absent. In fact, I wonder if the "cheese" aspect is mainly to get them to look orange. The ingredients list does include "cheese cream" and "natural cheese", but they are a bit far down on the list after the basic bread-making ingredients.

I ate these over a three-day period and I really liked them as a sort of wicked little bread snack. I don't know how bad they really are for you because Yamazaki-pan rarely gives nutrition information on its packaged bread products. In fact, on more than one occasion, I've had an interest in something they offer but passed on it because I had no idea what I was eating. This time, I just took the plunge anyway.

I wish these were cheesier, but they really hooked me with their texture and overall taste which I wish I could describe more effectively. The flavor is very subtle and probably would have been more pronounced with a bit more salt in the mix. At any rate, these pair well with soup or simply as a snack with some weight. If you come across them, they're well worth a sampling and are a unique experience.

Not to be a pain, but the name should be "HitoKUCHI mochi bread", basically meaning bite-size mochi bread. If mochi bread ever could have meaning outside of Japan!

By the way, thank-you for all of your reviews. Thoroughly enjoyable to read!

Thanks for the correction. I didn't think that was a kanji sitting there in the middle but rather hirgana. I'll fix that up. :-)

I much prefer Mos Burger over McDonalds any day of the week. Can't beat the classic spicy Mos Burger :)