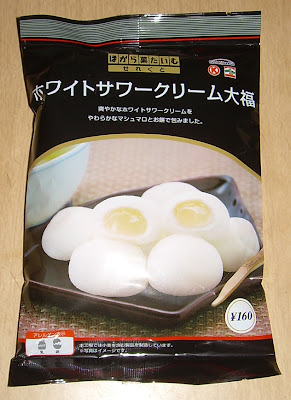 If you live in a linguistically odd environment long enough, you stop seeing strange things as strange. This is a fact that I was reminded of when I mentioned to my friend Shawn (noted wombat-stuffer and center of the known universe... at least as he knows it) that I was about to partake of some "white sour cream daifuku." He said, "is there any other kind of sour cream (other than white)?" He may have delusions of his own grandeur and a predilection for certain marsupials, but he did have a point.

There's something peculiarly interesting about the use of sour cream in daifuku. Since dairy culture isn't something I associate with traditional Japanese cuisine (I hang that on Europeans), mixing it with this type of sweet intrigued me. I found this at Sunkus (which apparently means "thanks" in Japan, though I know why, don't ask me to explain as it's boring), a convenience store I rarely frequent because it's off my beaten path. There are eight somewhat bigger than 100-yen/quarter coin-size blobs of mochi-covered filling in the bag and it costs 160 yen ($2). 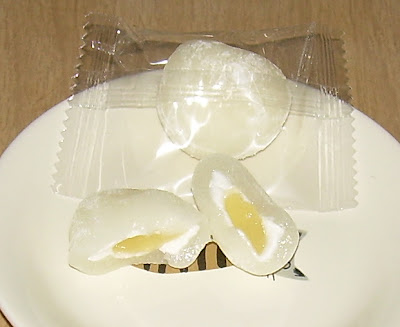 They smell somewhat glue-like, but that's the mochi (pounded rice cake) exterior. The blobs are soft and the exterior is slightly chewy. Inside, there is a slightly jelly-like filling surrounded by a thin layer of marshmallow. They are not too sweet, but also not too bland and there is a definite bite of sour cream which resembles yogurt. The flavors have good depth and even the marshmallow comes through as a separate taste experience.

This is a delicious combination of tastes and textures which I will definitely revisit in the future and highly recommend to anyone who enjoys yogurt-like flavors and the texture of mochi. Each is big enough for two satisfying bites and only 42 calories. It's well worth the cost and the caloric density.

Sounds like an interesting combo and quite good. I will give these a try :)

Another v. happy sumo! Yay! When I'm in Korea, I always see different milks and yogurts, but rarely sour cream. Interesting to see it fused into a daifuku.

I am really really sad I didn't get to try these! :( :( double sad face to that