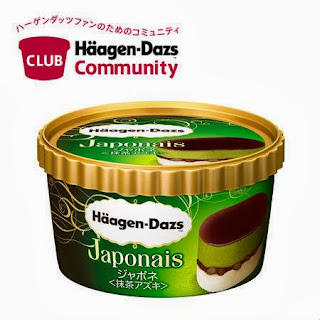 Starting from October 6, Haagen Dazs will be offering a "Japonais" flavor of ice cream in single serving containers. I have done the minimal amount of investigation and learned that the name of this is French for "Japanese". I guess that lends this an air of elegance, but it seems a little silly using a French name on an American ice cream in Japan. That being said, I'm sure that this is not a rare attempt to add a little European flair to a product by giving it a more "exotic" sounding name.

I've mentioned before in this blog that what people who aren't Japanese regard as more adventurous or exotic flavors than the dreck we get here at home are actually pretty conservative in Japan. This red bean and green tea ice cream, though it looks lovely in the illustration, is downright boring in its flavor options. Red beans and green tea are the equivalent of peanut butter and chocolate in Japan. They're everywhere and they're safe choices to cater to a market with conservative tastes. It's designed to set the hearts of young women with enough disposable income to pay $3-$4 for a tiny serving of ice cream aflutter.
Posted by Orchid64 at 8:00 AM